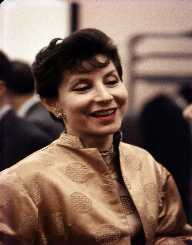 Betty Comden was born with the name Basya Cohen on May 3, 1917, in Brooklyn, New York, USA. Her parents were Rebecca and Leo Cohen.

Betty Comden attended  Erasmus Hall High School in the early 1930’s. Once she graduated, she went on to attend New York University. She graduated with a degree in drama in 1938.

After graduating from New York University, Betty Comden met some aspiring Hollywood-wannabes: Leonard Bernstein, Adolph Green, and Judy Holliday. She became fast friends with all three people. Together (all but Green), the group form the Revuers, a performing entertainment group. They gained some fame and solidified their friendships. Comden later worked with Green on Broadway in the show, On the Town. They wrote much of the script together and gave themselves main roles in the show. It was successful. However, some of their other shows (Bonanza and Billion Dollar Baby) were not as successful.

After leaving Broadway, Betty Comden found work in California at MGM. Green also worked with her at the studio. Together, the two wrote some screenplays; some of the popular are listed below.

The two worked on screenplays until the mid-1950’s before focusing on music on Broadway again. Together, they wrote some songs for a Peter Pan musical adaptation. They also wrote songs for some others musicals. They worked on this until the mid-1980’s. Some of their most famous late musicals are listed below.

Betty Comden won seven Tony’s for her work in musicals (and she was nominated for several more). Her winning Tony’s are listed below. Many of her Tony awards are shared with Green.

In 1980, Betty Comden was inducted into the Songwriters Hall of Fame.

In 1942, Betty Comden married Steven Kyle (whose name was previously Siegfried Schutzman). The couple had two children together: Susanna and Alan. Sadly, Steven died in 1979. Betty Comden did not remarry after his death. Green and Comden were never romantically involved.

Betty Comden died on November 23, 2006. The cause of her death was heart failure, as well as a barrage of other illnesses. She was 89 years old when she passed away.