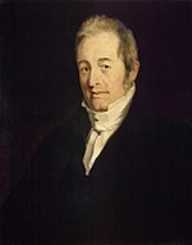 John Galt was born 2nd May 1779 in Irvine, Ayrshire, in Scotland. His father was a captain in the Navy as well as a merchant trader. A year after Galt was born, his father moved to Greenock.

The family visited their father regularly, and they rejoined him permanently in 1789.

Galt studied at Irvine Grammar School. Two of his classmates were Henry Eckford, a famous shipbuilder, and William Spence, a great mathematician.

When he was 17, John Galt worked at the Greenock Custom House. He then joined his uncle as a junior clerk and apprentice. While working for his uncle, Galt wrote stories and essays in his spare time. He sent them to local journals for publication.

In 1804, Galt relocated to London where he joined his father. In 1809, he enrolled at Lincoln's Inn to study law.
Galt became friends with Lord Byron and John Hobhouse on a trip to Europe. He traveled with them partway, and then he continued through Greece on his own.

He returned to London to begin a business, but his plans fell through, so Galt started to write instead. His first publication was a story of his travels. The book met with reasonable success.

In 1815, John Galt became Secretary of the Royal Caledonian Asylum. At the same time, he consulted on an individual basis to several businesses.

Galt published Benjamin West's biography in 1816. West was a painter.

He began submitting articles to Blackwood's Magazine in 1819.

Galt concentrated on writing for the next few years. He lived in various places including London, Edinburgh, and Glasgow, among others.

In 1824, John Galt became Secretary of the Canada Company. The Company worked to colonize the Huron Tract in Upper Canada. Galt traveled to New York City in 1826. Soon after his arrival, word came that his mother was very ill. He returned to be with his mother, who died several months later.

Galt returned to Canada later that same year. He founded a town called Guelph in 1827, and he based the headquarters of the Canada Company there.

In 1829, the Canada Company dismissed him, and as a result, he was sent back to Britain. Upon his return to Britain, he went to prison for unpaid debts.

After his release in 1831, John Galt moved to Old Brompton and lived in a house called Barn Cottage.

Galt continued to conduct business, but he resigned in December 1832 due to ill-health. After this time, he kept writing and editing.

One of his most famous works was Annals of the Parish (1821).

Galt has several sites and buildings named in his honor.

John Galt married Elizabeth Tilloch, and they had three sons.