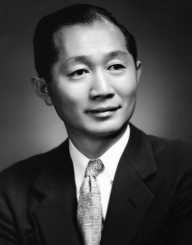 Minoru Yamasaki was an American architect, best-known for his work on the World Trade Center.

Minoru Yamasaki was born in the city of Seattle, Washington, on December 1, 1912. His parents’ names were John and Hana. They were Japanese. He spent his childhood in the city of Auburn.

Minoru Yamasaki studied at the Garfield Senior High School. In 1934, he got a degree in architecture from the University of Washington.  He then earned a master’s degree from New York University. Decades later, he got a Doctorate in the Fine Arts from Bates College in Maine.

Yamasaki’s first more prominent work was the Pruitt Igoe public housing project in Saint Louis, Missouri. His first internationally famous project was the Pacific Science Center in Seattle. He designed two international airports – one in Saint Louis, and the other in Dhahran, Saudi Arabia. He designed two synagogues – one in Glencoe, Illinois, and the other in Bloomfield Hills, Michigan.

He created parts of the campuses of Carleton College in Minnesota and the University of Regina in Canada. He worked on the Federal Reserve Bank in Richmond, Virginia, and the Bolling Air Force Base in Washington, D. C. He designed the headquarters for the Reynolds Metals Company.

Minoru Yamasaki was chosen as one of the Fellows of the American Institute of Architects. He won the Institute’s First Honor Award three times. He reached the cover story of TIME magazine in 1963.

In 1941, Minoru Yamasakimarried a pianist named Teruko Hirashiki. They had three kids, named Taro, Kim, and Carol. They got a divorce in 1961. After that, he got into two more marriages that ultimately failed. In 1969, he remarried his first wife.

Minoru Yamasaki suffered from stomach cancer. He passed away on February 6, 1986, in Detroit. He was 73 years old. He did not live to see the destruction of the Twin Towers during the terrorist attacks on September 11th, 2001.