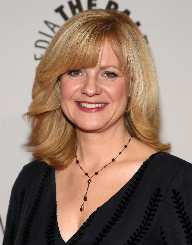 American actress, producer, and writer Bonnie Hunt was born on the 22 September 1961 in Chicago, Illinois to Robert Hunt and Alice Jatczak. She has three brothers and three sisters.

Bonnie Hunt graduated from the Notre Dame High School for Girls in Chicago, Illinois. She also trained as an oncology nurse at Northwestern Memorial Hospital in Chicago.

Bonnie Hunt became interested in improvisational comedy, and in 1982 she formed An Impulsive Thing, a comedy troupe. Then in 1986, Hunt became a member of Second City.

In the early 1990s, Bonnie Hunt worked with David Letterman on The Building. They teamed up again in 1995 in The Bonnie Hunt Show.

Her voice has been used as Sally Carrera in the Cars video games series.

Bonnie Hunt married businessman John Murphy in 1998, but the couple has since divorced.

Bonnie Hunt has been involved with the Multiple Myeloma Research Foundation.