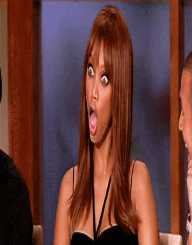 Tyra Banks was born 4th December 1973, to Donald Banks and Carolyn London. She was born in Inglewood, California, in the United States. Her father is a computer consultant, her mother a medical photographer. She has an older brother named Devin.

Tyra Banks studied at Immaculate Heart High School in Los Angeles, and she graduated in 1991.

Tyra Banks started her modeling career at the age of 15 when she was still in school. She was signed by L.A. Models, but switched to Elite Model Management when she was 16.

Her modeling career took her to Europe, and Banks moved to Milan to take advantage of the opportunity. In her first season on the runway, she did 25 shows for Paris Fashion Week. She has been in Vogue, Harper’s Bazaar, and Vanity Fair, all over the world.

She worked for iconic fashion brands like Chanel, Yves Saint Laurent, Christian Dior, and Calvin Klein, among many others.

Banks returned to the U.S. in the mid-1990s to further her modeling career. She became the first African-American woman to grace the cover of GQ, and she was the first woman on the cover of Sports Illustrated Swimsuit Issue.

Banks debuted on television in 1993, on The Fresh Prince of Bel-Air, where she appeared over several episodes. Her movie debut was in 1995.

Banks established her own production company, Ty Ty Baby Productions, but within a short space of time, changed the name to Bankable Productions. In 2003, Banks produced America’s Next Top Model. She created and hosted the show, as well as being a judge. The show ran until 2015, had a break in 2016, and started again in 2017.

Banks then starred in The Tyra Banks Show, also produced by her company. The talk show began in 2005, and it ran until 2010.

Banks re-signed with one of her former modeling agencies, IMG Models, in 2010.

As well as her television career, Banks also acted in many movies. Her movie debut was in Higher Learning in 1995. She starred in several more movies and then won a role in Coyote Ugly (2000).

Up until 2009, Banks appeared in 12 movies. Her television career spans from 1993 to the present, and she has been in 26 television shows or series.

As well as her acting and modeling careers, Banks is involved in various other endeavors as well.

In 1998, Banks co-wrote Tyra’s Beauty, Inside and Out. In 2011, she released her first novel, Modelland, which became a New York Times Best Seller within a month. Her next book was co-written with her mother, called, Perfect is Boring, and was released in 2018.

She has also been involved in music, appearing in music videos for stars like Michael Jackson, Tina Turner, and George Michael, amongst others. Banks has also released three singles of her own. The first was calledShake Ya Body in 2004.

In 2014, Tyra Banks established her own cosmetics brand called Tyra Beauty, which operates under a multi-level marketing system.

In 2016, she accepted a position at Stanford University as a guest lecturer on personal branding.

Tyra Banks has been nominated for ten awards, and she has won four of them, including two Day Time Emmy Awards, and two Teen Choice Awards.

Tyra Banks started dating Erik Asla, a Norwegian photographer, in 2013, and in January 2016, they had a son named York Banks Asla.

Tyra Banks has established two programs. The first is the TZONE program, which focuses on leadership and the development of life skills.

Her other program is the Tyra Banks Scholarship, which provides scholarships to African-American girls to provide them an opportunity to attend Immaculate Heart High School, where Banks herself studied.