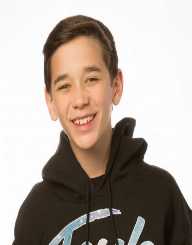 Popular Viner and social media star Aaron Braden Carpenter was born on October 5, 1998, in Brantford, Louisiana, United States. He was raised in the same place by his mother Becky and stepfather Jeff Anderson since his biological parents separated soon after his birth. Aaron has two biological siblings, a sister named Candice and a brother named Dustyn. He also had a stepbrother named Nic Anderson who died in the year May 2015 at the age of 17. Aaron’s elder brother Dustyn Carpenter is also a famous social media star.

Aaron Carpenter was good at studies right from his childhood. However, he decided to drop out of high school in his freshman year as he wanted to focus more on his career in social media. He later joined an online school.

Aaron Carpenter got familiar with social media at a very young age. He used to post several self-created videos on various social media channels. He was quite popular on the video blogging platform named Vine. However, it was his family friend and Louisiana based entrepreneur Bart Bordelon who gave him the idea of converting his hobby into commercial success. Bart convinced Aaron to become a part of the group called ‘Magcon Boys.’

Magcon stands for ‘Meet and Greet Convention.’ The group had a few other social media stars like Jack Dail, Ethan Dolan, and Grayson Dolan. Among the four boys, Jack was popular for his short dancing videos while Ethan, Grayson, and Aaron earned a name for their funny videos.

Aaron Carpenter was already quite popular on social media, but he became a sensation after joining the Magcon Boys group. The main reason behind his growing popularity was his elaborate, unpretentious yet funny videos. Fans all over the world found his videos extraordinarily relatable, and girls swooned over his charming looks. Apart from making funny videos,

With the growing popularity of Magcon Boys, many upcoming social media stars like Taylor Caniff, Jack Johnson, Nate Maloley, etc. joined the group. Soon, the group members became the most popular boys around the world. However, this group of boys also had their fair share of ups and downs. While touring the USA, disagreements, and disputes cropped up between the members of the group.

Thus, the Magcon Boys decided to part ways and split the group. This decision by the group members disheartened their fans who then made several requests to the boys to sort out their differences and get back together again. The wishes of the fans came true soon after that when the boys decided to mend the cracks between them and formed the group once again.

Aaron Carpenter is currently 18 years old. In 2015, Aaron’s stepbrother Nicholas Anderson passed away following a tragic car accident. Within a few months, Aaron’s stepfather Jeff Anderson also breathed his last. Aaron was very close to his stepbrother and stepfather and was completely shattered by their untimely demises. He shared an emotional tribute to the two departed souls on his social media accounts.

Just like the other Magcon Boys, Aaron Carpenter also lives in Los Angeles. The 5 feet 10 inches tall guy loves to play basketball in his free time. He has even played the sport professionally. Aaron is a cleanliness freak. He loves going for trips on beaches. His best friend is his group mate, Cameron Dallas.

Aaron has time and again mentioned that he hates waking up in the morning. Till date, he has managed to stay away from controversies. He prefers to keep his life private and has never shared details about his relationship status. It is believed that the hazel-eyed handsome lad is still single.

Aaron Carpenter has a very supportive family, and one of his biggest strengths is his mother Becky who rejoices in her son’s achievements and keeps supporting him through thick and thin.