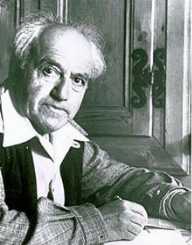 Ernest Bloch was born on July 24, 1880, in Geneva, Switzerland. As a child, he was interested in music, and at nine years of age, took up playing the violin. Soon after learning to play, he began composing. Bloch went to study music at the conservatory in Brussels, under the celebrated Belgian violinist Eugene Ysaye. After finishing school, he traveled around Europe. in 1900, he moved to Germany and studied with Iwan Knorr at the Hoch Conservatory in Frankfurt. In 903, he went to Paris and then moved back to Geneva. In 1916, Bloch moved to the United States. During his study times, Bloch produced many compositions but did not succeed in publishing them.

After World War I broke out, Ernest Bloch traveled to New York together with the Maud Allan Dance Company as a conductor. The company went broke soon after, and he was left in Ohio without a job. This unfortunate circumstance forced Bloch to stay in America, which turned out to be fortunate. Bloch became a successful composer, director, teacher and administrator. His performances were seen in New York and Boston, and he was a major figure amongst contemporary musicians.

Ernest Bloch took a teaching assignment at the Mannes School of Music in New York, and at the Cleveland Institute of Music. in 1920, he became the first Musical Director of the Cleveland Institute and served five years in the position. In 1925, he was appointed to the position as the director of the San Francisco Music School. Bloch composed his Epic Rhapsody America in 1927 and won the Musical America contest.

In 1930, Ernest Bloch returned to Switzerland, where he continued to live for the next decade. During this time he traveled through Europe giving performances and continued to compose. After World War II started out, fearing the rise of Nazism, Bloch went back to the United States. He settled in Oregon and worked as a professor at the California University in Berkeley.

Ernest Bloch married Marguerite Schneider in 1904. The couple had three children. His first son Iva became an engineer at the Bonneville Power Administration. His daughter Suzanne also became a musician and a lute teacher at the Julliard School in New York. His third child Lucienne became the chief photographer at the Rockefeller Center Mural project.

Ernest Bloch died on July 15, 1959, after a long struggle with cancer.