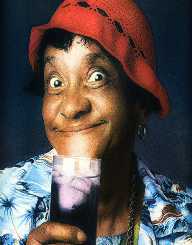 American comedian Loretta Mary Aitkin was born in North Carolina on the 19 March 1894. She was one of sixteen children, and she was the great-granddaughter of a slave. Growing up both her parents met with accidental deaths when she was still young. Later, while still a young girl, she was raped twice, and both rapes resulted in pregnancies. The babies were given up for adoption.

Moms Mabley left school at 14 to join a vaudeville troupe.

In 1918 Moms Mabley joined an African-American traveling vaudeville show as a comedian and singer. It was around that time she met fellow performer Jack Mabley. They were in a short-term relationship, and she took his surname. Her nickname Moms came about because of her nurturing name.

By the 1920s she was working at the Cotton Club alongside the duo Butterbeans & Susie and starting to gain attention as a comedian.

During the early 1930s, Moms Mabley was working on Broadway in Fast and Furious: A Colored Revue in 37 Scenes. Other stage shows included Blackberries of 1932, The Joy Boat, Sidewalks of Harlem, Red Pastures and Swingin’ the Dream.

During her early career, she performed alongside Count Basie, Duke Ellington, and Cab Calloway at the Cotton Club in Harlem and the Club Harlem in Atlantic City.

After the civil rights movement in the 1960s. Mainstream America discovered Moms Mabley and appeared on national television alongside Bill Cosby, Johnny Carson, Mike Douglas and Merv Griffin at venues like the Kennedy Center, the Copacabana and Carnegie Hall.

One of her final projects was the film Amazing Grace (1974).

After the adoption of her first two children, Moms Mabley went on to have four others. They were Bonnie, Christine, Yvonne, and Charles.

Even though she portrayed middle-aged women with an eye for young men, Mabley was a lesbian and had come out in her twenties.

Veteran stage actress Clarice Taylor who had become famous as Bill Cosby’s mother on The Cosby Show discovered Moms Mabley’s work in the 1980s and set about researching her life. The result was a play Moms (1987) written by Ben Caldwell a Harlem-born playwright. Taylor starred as Mabley. In recent years Whoopi Goldberg’s made a documentary Moms Mabley: I Got Somethin to Tell You (2013).