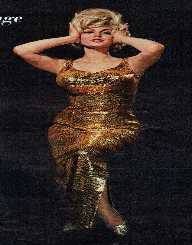 American actress of stage and film Barbara Harris was born on the 25 July 1935 in Evanston, Illinois. Her parents were Oscar and Natalie Markowitz.

Barbara Harris was educated at Wright Junior College, Chicago, The Goodman School of Drama and the University of Chicago.

Barbara Harris was drawn to the stage and become involved with the Second City Players in Chicago. She also joined a touring troupe, The Compass run by Paul Sills. When Sills took From the Second City to New York City, Harris was included in the cast and won critical acclaim.

In the early 1960s, Barbara Harris moved from Chicago to New York City. She appeared in the stage production: Oh Dad, Poor Dad, Mama's Hung You in the Closet and I'm Feeling So Sad and subsequently won the Theatre World Award (1962). In 1965 Barbara Harris won praise for her portrayal of social worker Sandra Markowitz in A Thousand Clowns. In 1965 she starred as Daisy Gamble in a play by the same name. Her role was that of a chain-smoking woman under hypnosis. The show had mixed reviews but received three Tony nominations.

In 1972, Harris won an Academy Award nomination for Best Supporting Actress for her role in Who Is Harry Kellerman, And Why Is He Saying Those Terrible Things About Me? With Dustin Hoffman. In 1972, she starred in The War Between Men and Women (1972) with Jack Lemmon. In 1974 Mixed Company, she had the lead role in a film about a racially prejudiced basketball coach alongside Joseph Bologna.

She went on to star in many memorable and successful films including Family Plot (1976) a Hitchcock film; Nashville (1975), Peggy Sue Got Married (1896) Dirty Rotten Scoundrels (1988).

In 1961 Barbara Harris won the New York Drama Critics Award for the most promising young actress and won it a second time in 1962. She also won a Tony in 1962 for Best Feature or Supporting Actress in a Musical Play. Harris then won another Tony in 1966 for Outstanding Musical Actress, and in 1971, an Academy Award for Best Supporting Actress nomination for her role in "Who Is Harry Kellerman, And Why Is He Saying Those Terrible Things About Me?".

Barbara Harris was married to Paul Sills from 1955 to 1958 when the couple divorced.

Barbara Harris continued acting well into her fifties; her final film role was in Grosse Pointe Blank in 1997. In 2002, Harris moved to Scottsdale, Arizona. She is on record as saying that she did not miss acting. Harris also noted that it was the people she worked with who interested her; not the fame.

In 2005, Barbara Harris appeared on the radio show Anne Manx of Amazonia as The Queen.