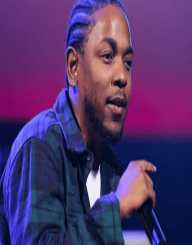 Kendrick Lamar Duckworth was born in Compton, California, on 17 June 17, 1987. His parents are Kenny Duckworth and Paula Oliver, and they moved from Chicago, where Kenny was a member of the Gangster Disciples.

After moving to Compton, Kendrick Lamar's two younger brothers and a sister were born. The family grew up on welfare and Section 8 Housing.

Kendrick went to McNair Elementary and then attended Centennial High School, both in Compton.

Kendrick Lamar was a straight A student, but suffered from stutter during middle school, and aspired to become a basketball player. Kendrick later fell in love with poetry and started writing his lyrics and poems.

When Kendrick Lamar was around eight or nine years old, Tupac Shakur and Dr. Dre filmed California Love near his home, where he witnessed the makings of the video firsthand. It was his first hip-hop experience, and he had his mind set on it since.

From then, Kendrick Lamar was a hype man for various rappers, notably Jay Rock and Ya Boy. During this time, he toured around the country while continued to produce songs for his album.

Kendrick was featured in Jay Rock’s first single All My Life (In The Ghetto). He gains some fame after a rap battle with Charles Hamilton.

After releasing his third mixtape C4, Kendrick dropped K- Dot stage name in favor of his real name. The Kendrick Lamar EP was released late 2009, and he formed Black Hippy with Jay Rock, Ab-Soul and Schoolboy Q, the rappers that Top Dawg signed with.

While Kendrick Lamar toured with The Independent Tour, he released Overly Dedicated, his fifth mixtape. It was digitally released and became free in September 2010. It was his song Ignorance Is Bliss that prompted Dr. Dre to collaborate with him.

And his first independent album, Section 80 was released in 2011, followed by his first major album Good kid, an m.A.A.d city in 2012.

The 2012 album gained Kendrick Lamar seven Grammy nominations, but he did not win any. Then To Pimp, A Butterfly was released in 2015, which got him on the cover on Rolling Stone Magazine and won Kendrick five Grammy Awards.

To date, Kendrick Lamar has four major albums, the latest release is Damn in 2017. He also released Untitled Unmastered in 2016, which had songs that were not used into Pimp a Butterfly. He also has five mixtapes and around forty-three singles.

To Pimp A Butterfly won him five Grammy Awards, while his single “i” got him his first two wins for Best Rap Song and Best Rap Performance.

Kendrick Lamar met Whitney Alford in Centennial High School, and they had been dating for ten years. In 2015, they were engaged to marry.