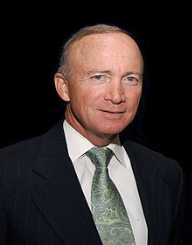 Mitch Daniels is an American educationist, politician and former Republican governor of the State of Indiana.

Daniels went to Delaware Trail Elementary School. He then proceeded to Westlane Junior High School. He graduated to North Central High School. After high school, Daniels enrolled at Princeton University. He graduated with a degree in 1971. Armed with a first degree, he enrolled at the Indiana McKinney School of Law. He later transferred to Georgetown University and completed his Law degree.

A bright student in his class, Daniels got affair share of trouble with the law. In 1970 while still in Princeton, he pleaded guilty to being disorderly after consuming marijuana. He was convicted to two days in jail and a cash fine of USD 350. Daniels later confessed that one of his friends used his room for trafficking without his knowledge.

Daniels started interacting with politics while a student at Georgetown University. He worked as an intern in the office of Indianapolis Mayor Richard Lugar. He worked with Lugar in the 1971 and 1974 successful mayoral electoral campaigns. In 1976 Lugar won the national Senatorial seat. He became the Chief of Staff for Lugar’s team. Daniels served in Lugar’s first term until 1982.

He moved through the ranks of the party rather fast. Daniels helped the Republicans wrestle control of the Senate from the Democrats. He led Lugar to win three successive Senatorial elections. In 1985 Daniels was appointed to serve in the White House. He served as the chief political advisor to the US President Ronald Reagan.

After almost over a decade in Republican Party politics, Daniels retired back to Indiana. In 1987 he became the head of the Hudson Institute. He declined to take up the vacant Senatorial seat in Indiana in 1988 following the election of Senator Dan Quayle to the office of US Vice President.

In 1990 he joined the private sector as the head Eli Lily and company, a giant pharmaceutical company in the US. He served for a decade at the company. During his stay at the helm, he successfully engineered public relation campaigns to popularize the company’s products. He also served on other company boards including Indiana Power and Light Company.

Daniels returned to the US capital in 2001. He got an appointment to become the director of the Office of Management and Budget. As the head of the budgetary control organ, Daniels instituted conservative fiscal measures contrary to most politicians.

He distinctively championed for the reduction of government spending in the wake of national financial struggles. His cost-cutting steps brought relief to the national budget and earned him an array of political enemies.

In 2004 Daniels declared his interest in the gubernatorial seat in Indiana State. He won the elections and took office in 2005. A traditional fiscal conservative, Daniels embarked in cutting expenditure in the state government. He instituted the Indiana Economic Development Corporation, a catalyst of his grand plan. He managed to attract investors and created more jobs annually.

He privatized the daily operations of the Indiana Highway road tolls to attract more revenue collections. He proved his critics wrong by turning around the fiscal decline to the profitability of the state revenue collection in his first term. Daniels successfully defended his seat with a convincing majority in 2008.

In the 2012 US presidential campaigns, he endorsed Mitt Romney. Daniels declined an invitation to be Romney’s running mate in the elections. Romney eventually lost to President Obama. Daniels downplayed any political aspirations in the 2016 elections.

In 2013 Daniels joined Purdue University as the institution's president. As president, he cut the tuition fees and brought in more interactive teacher-student social sessions. He started the competency-based degree program to enable students to become competitive in the market. Unlike his predecessors, Daniels took a salary decrease in his contract.

Daniels is married to Cherri Herman and has four children. A practicing Christian, he is a faithful of the Syrian Antioch Orthodox church.