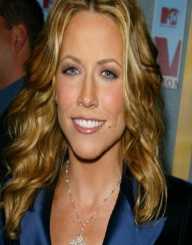 Sheryl Crow is an American singer, songwriter and an actress. She was born on February 11th, 1962. Her place of birth was in Kenneth, Missouri. She schooled in Kenneth High School as a junior. In her senior years, she went to Missouri University. As part of her evolving career, at one point she taught elementary school. After this, she shifted to L.A. Her solo career has been a significant success in her music career. This has earned her numerous Grammy awards.

Sheryl Crow is the daughter of Wendell Wyatt Crow and Bernice Crow. Wendell, her father was a lawyer by profession. He was also skilled in playing trumpet. On the other hand, Bernice is a piano teacher. Charles A. Crow was the grandfather to Sheryl and that he was a congressman. Crow has two other sisters and a brother. Her sisters are Karen and Kathy while her brother is called Steven.

With her mother being the piano teacher, Crow music career took off when she was only six years old. Crow went on to pursue music as her major after which she graduated from University of Missouri in 1984. At the university, she was active in music as she performed together with local bands such as Cashmere.

Shortly after graduating from the university, Sheryl Crow took the job of an elementary school teacher. She did this while she was still in St. Louis after which she shifted to Los Angeles in 1986. The early part of her career includes her working as a backup singer. In addition to this, she helped her advertising clients by recording jingles. Working as a backup singer, she worked with famous stars including Michael Jackson’s “Bad” (1987-1988), Don Henley, Rod Stewart, and Sting.

During the early 90s, she had begun recording, and she initially did this for A&M Records. Unfortunately, this album did not sound right, and she merely had to put it on her shelf. After this recording, Crow worked with The Tuesday Music Club band. This band comprised of people like David Baerwald, Bill Bottrell, David Ricketts and her then-boyfriend Gilbert. It did not take time before the band released a platinum album. It is in this collection that Crow was included in the hit song “All I Wanna Do.”

After this significant hit, other singles followed including “ Strong Enough” which hit the Billboard top 5. “ Can’t Cry Anymore” was another single that also got to top 40. Tuesday Night Music Club was now a recognized band in both America and the U.K. During the 90s; they went on to sell millions of copies. From Sheryl Crow’s outstanding performance, she won herself 3 Grammies with the band.

Sheryl Crow did not go solo out of her willingness. On the contrary, she had aggravated her former band by claiming that the “ Leaving Las Vegas” the song was her own and that it was autobiographical. She mentioned this after featuring in the show Late Show with David Letterman. It is at this point that the group decided she should stand on her own.

Well, things did not go wrong for the musician as it was during this time that the Grammy awards came in her life. She also got the opportunity to perform at the MTV Unplugged in 1995.

In 1996, she won two other Grammy Awards for being the Best Female Rock Vocal Performance and releasing the Best Rock Album Sheryl Crow (1996). In the coming years, Crow spent most of her career performing. After this, her third album came up named The Globe Sessions (1998). This also won her another Grammy for being the best Rock Album that year.

In 1999, her performances were highly demanded all over Europe. Sheryl Crow made her tours by the company of Lilith Fair. Her exceptional on-stage performances won her a Grammy award in 2000. This was after her rendition of the song "Sweet Child o'Mine” by Guns N Roses. Her 2006 album Wildflower, received nominations for up to three Grammies.

Sheryl Crow also hit the headlines with her romantic relationships that she engaged in. She has dated some high-profile celebrities including Owen Wilson, Eric Clapton, and Lance Armstrong who was a legendary cyclist. After getting involved to Armstrong in 2005, shortly after, the two announced that they had officially separated. After this separation, Crow learned of her breast cancer illness.

The good news for Crow was that her cancer was diagnosed while it was still early. This meant that with radiation and other forms of treatment, she would soon get well. To fulfill one of her dreams, Crow decided to buy herself a horse.