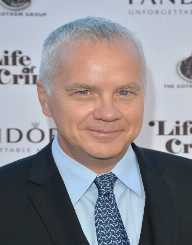 Tim Robbins is an award-winning actor best known for his outstanding performances in films such as ‘Shawshank Redemption,' ‘Jacob’s Ladder,' ‘The Player’ and Mystic River.' He is also a director of films that received critical acclaim such as ‘Dead Man Walking.’ Additionally, he released his music album ‘Tim Robbins and The Rogues Gallery Band’ in 2010 which contained a collection of music written for 25 years.

Tim Robbins is the son of Gilbert Lee Robbins and Mary Cecilia, born on October 16, 1958, in West Covina California and was brought up in New York City. At an early age, his family moved to Greenwich Village so that his father could pursue a career in music with a music group named, 'The Highwaymen'.

He started performing in theatre at the age of twelve and later enrolled in Stuyvesant High School where he joined the drama club. Then, Tim Robbins attended SUNY Plattsburgh for two years followed by a receipt of a Bachelor of Arts degree in Drama from UCA Film School in California in 1981.

Tim Robbins started his acting career as a teenager in Street Theatre and played a title role in a musical adaptation of, ‘Antoine de Saint-Exupery’s’ (The Little Prince). In 1981, he formed an experimental theater group named, 'Actor’s Gang' which included his acting friends he schooled back in College.

By 1982, Tim Robbins performed as a domestic terrorist Andrew Reinhardt in a television series titled, ‘St. Elsewhere.’ Three years later, Robbins made a guest appearance in the second episode, ‘Gunfight at the So-So Corral’ of the television series ‘Moonlighting.' Additionally, he played the role of a frat animal named ‘Mother’ in a film titled, ‘Fraternity Vacation’ followed by a fighter pilot film, ‘Top Gun’ in 1986.

In 1988, Tim Robbins performed in ‘The Love Boat’ as a young character during the Second World War followed by a leading role in ‘Bull Durham’ a baseball film in 1988. Robbins received critical acclaim for his leading role in, ‘The Player’ film followed by a screenwriting debut about a conservative senatorial candidate. Later in 1994, he co-starred with Morgan Freeman in novel based film, ‘The Shawshank Redemption.'

In 1995, he wrote, produced and directed a critically acclaimed film, ‘Dead Man Walking’ which he co-starred with Sean Penn. Tim Robbins directed his next film in 1999, a musical, ‘Arlington Road’ followed by ‘Antitrust’ and comical films such as, ‘The Hudsucker Proxy,' ‘Nothing to Lose’ and ‘High Fidelity’ in 2001.

Tim Robbins played a character of a traumatized man due to a child molestation in, ‘Mystic River’ in 2003.He also performed roles of a temporarily blind man in ‘The Secret Life of Words’ followed by an apartheid torture in ‘Catch a Fire.'

By 2006, he directed a 1984 George Orwell novel based film, ‘San Francisco Mime Troupe’ which played in several venues in the United States. In 2008, he performed in ‘The Lucky Ones’ and ‘City of Ember’ followed by his next role in a superhero film, ‘Green Lantern’ in 2011.

Exceptionally in 2010, Tim Robbins released his album ‘Tim Robbins & the Rogues Gallery Band’ which included a collection of songs he wrote in 25 years. Also, he directed an HBO series titled, ‘Treme’ followed by episodes; ‘Everything I Do Gonh Be Funky’ in 2011 and another episode in season three titled, ‘Promised Land’ in 2012. Uncommonly, during the 63rd Berlin International film, Robbins participated as a member of the jury.

In 1992, Tim Robbins won the Best Actor Award at Cannes followed by an Oscar Award Nomination for Best Director in 1995. In 2003, Robbins won an Oscar and a SAG Award for best-supporting Actor and in 2005; he received a Pudding Pot Award as the 39th Annual Man from The Hasty Pudding Theatricals. Also, he won an Academy Award as the tallest actor at 6 feet 5 inches, in 2006.

Tim Robbins started a relation with Susan Sarandon in 1988, and they have two sons namely, John Jack Henry and Miles Guthrie. However, their relationship ended in December 2009. His father Gilbert Robbins was a musician and an actor who managed 'The Gaslight Café' while his mother Mary Cecilia, worked as an actress. As an avid baseball and ice hockey fan, he advertised upcoming Ranger Games for MSG Network in 1995.