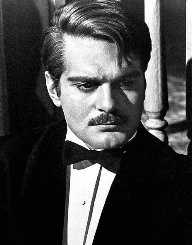 Omar Sharif was an Egyptian actor who is best known for his roles in the classic films Lawrence of Arabia and Doctor Zhivago.

Omar Sharif was born as Michel Dimitri Chalhoub in Alexandria, Egypt on 10 April 1932. His family was Melkite Catholics from Lebanon. His father, Joseph Chalhoub, was a merchant and his mother was a well-regarded society hostess, who often entertained the wealthy and powerful of Egypt. Sharif attended Cairo University and graduated with a degree in mathematics and physics. Sharif worked for a brief time with his father before moving to London to study at the Royal Academy of Dramatic Art.

Omar Sharif started acting in Egypt in 1954. His first film was Devil in the Desert. The same year he appeared in another Egyptian film, Struggle in the Valley. Sharif quickly began landing lead roles in Egyptian cinema and became a star. In 1959, Sharif starred in an Egyptian adaption of Anna Karenina called The River of Blood. Sharif’s English breakthrough came in 1962 when he appeared in Lawrence of Arabia. Sharif was originally cast in a much more minor role, but as some other actors turned down the role of Sherif Ali Sharif was cast in the role. While working on the film Sharif helped Alec Guinness develop his Arab accident, Guinness was playing the role of Prince Faisal of Iraq. Sharif’s character was the Arabian companion of the title character of the film played by Peter O’Toole. The film focused on T.E. Lawrence, a British officer who collaborates with the Arab National Council during World War I to fight against the Ottoman Empire.

Sharif’s character was fictional and was an amalgamation of some Arab leaders who had served alongside T.E Lawrence during the First World War. The film was a huge success and garnered ten Academy Award nominations, it also continues to receive huge critical acclaim and was a commercial success. Some directors have since claimed served as their inspiration for getting into filmmaking. Sharif had been utterly unknown outside of the Middle East before the film, but afterward made him a well-known star. Sharif benefitted from Hollywood’s general view of all foreigners of being largely interchangeable and his linguistic skills only added to his ability to play multiple nationalities. His next film saw him again appear alongside Alec Guinness.

Sharif appeared in the 1964 historical epic The Fall of the Roman Empire. The film was famous for having the biggest outdoor film set ever constructed and being a huge financial flop. Despite its commercial failure the film was quite well received by critics. The same year Sharif played the role of Francisco, a priest, in Behold, a Pale Horse. The film focuses on the end of the Spanish Civil War and also featured Gregory Peck. The film was unsuccessful, and Sharif admitted it was a bad film. Sharif’s next role was in The Yellow Rolls-Royce, a composite film that focuses on the different owners of the title vehicle, set around the years of the Second World War. Sharif plays a Yugoslav anti-Fascist partisan who is the love interest of Ingrid Bergman’s character.

In 1965, Sharif played the title role in Columbia Picture’s Genghis Khan. The film was slated for its historical inaccuracy. Sharif’s role as the Mongol Khan was entirely overshadowed by his performance the same year in Doctor Zhivago. The film is based in Russia through the years of the First World War and the build-up to and the outbreak of the Russian Civil War. The film sees Alec Guinness’ character tell the life story of Doctor Zhivago, Sharif’s character, to a young woman. The film then tells of the romantic and political struggles of Zhivago through the political turmoil that faced Russia at the start of the twentieth century. The film earned ten times its budget at the box office and was nominated for five Academy Awards.

Doctor Zhivago also saw Sharif work with director David Lean again; Lean had directed Lawrence of Arabia. The film did come in for minor criticism for its failure to nail down an ideology given its backdrop. However, director Lean had intended to focus only on the human romance rather than wider political dogma. It was a musical comedy that caused the biggest political fallout of Sharif’s career. He was condemned by his home country and by most of the Arab nations when he appeared alongside Barbara Streisand in the 1968 film, Funny Girl. The issue was that Streisand was Jewish and Egypt and the wider Arab world still did not recognize Israel. Despite this, the film was a success and spawned a sequel were Sharif, and Streisand reprised their roles called, Funny Lady, which was released in 1975.

Sharif never again captured the fame and success of Doctor Zhivago or Lawrence of Arabia. In 1976, Sharif appeared in The Pink Panther Strikes Again but did not have a major role. Sharif plays the role of Melchizedek in the film The 13thWarrior, which is based on the legend of Beowulf. In 2004, he appeared alongside Viggo Mortensen in Hidalgo, a film about a excellent desert horse race. Sharif provided the voice of the Narrator in 10,000 B.C.

Omar Sharif married Egyptian actress, FatenHamama, in 1955. Sharif also abandoned his Catholic faith and his birth name before the marriage. Together they appeared in some Egyptian films together. Sharif and Hamama had a son, Tarek, together. Tarek appeared with Sharif in Doctor Zhivago, Tarek played the young Doctor Zhivago, Sharif’s character, in the film. Sharif and Hamama divorced in 1974, having separated in 1966. Sharif never remarried, but he did have a romantic affair with Barbara Streisand while filming Funny Girl. Sharif was a keen bridge player and was a ranked player. He also lent his name to a bridge video game. Sharif a heavy smoker suffered some heart attacks in the early 1990s. Sharif was reported to be suffering from Alzheimer’s in 2015. He died of a heart attack on 10 July 2015.