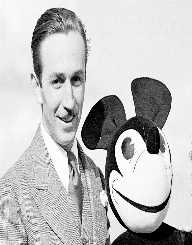 Walt Disney was born on December 5, 1901, in Chicago, Illinois, USA. His parents were Flora and Elias Disney. His siblings were Herbert, Raymond, Roy, and Ruth.

As a teenager, Walt Disney attended McKinley High School. He was dual-enrolled and attended classes at the Chicago Art Institute. However, he later dropped out of school to serve in the United States military. However, his application was denied because he was underage.

After leaving school, Walt Disney worked as an ambulance driver for the Red Cross. He kept this position for about a year.

In 1919, Walt Disney moved to Kansas, where he soon earned a job working for the Pesmen-Rubin Art Studio. There, he wrote ads. He only worked here for about a year. Then, in 1920, he began working for the Kansas City Film Ad Company. It was while here that he had one of his first jobs where he worked with animation (mostly for commercials). This job and his new-found love of animation inspired Disney to go into business for himself.

In the early 1920’s, Walt Disney started to make his short cartoons, which he called Laugh-o-Grams. He aired them in a local theater for a short time before opening up his studio, which he called Laugh-o-Grams Studio. Sadly, the cartoons were not famous enough for Disney to make enough money to keep the studio open. It closed in 1923, and Disney filed for bankruptcy.

Walt Disney did not let the bankruptcy ruin his dreams of having his own animation studio. Around the mid-1920’s, Disney teamed up with his brother, Roy, and moved to California, where the two brothers opened up the Disney Brother’s Studio. One of the first people the brothers hired to work for the studio was Lillian Bounds, who would work for the company for decades to come, and who would one day marry Walt.

One of the first cartoons that the Disney Brother’s Studio created were the Alice Comedies, which were based on the story Alice in Wonderland. The brothers invented a new character for the shorts called Oswald the Lucky Rabbit. However, these shorts did not last long (with Disney in charge) as Universal Pictures bought the rights to the character in 1928. Many of Disney’s artists also moved to work with Universal Pictures.

Walt Disney did not let the setback of losing many of his artists ruin his company. It was soon after this that he worked alongside the artist Iwerk to create the character of Mickey Mouse. The character soon starred in his short silent films. The first of his films were not very popular, though. It was not until sound and music were added to the short films that the character and the shorts kicked off. After this, all of the Disney shorts had sound. For the next few years, Disney continued to make black and white shorts with sound and music. Finally, in 1935, Disney started to make his shorts in color. This started with Flowers and Trees. Form this point on; the shorts were in color. Around the same time, Disney was working on his first full-length animated film. After several years of production, Snow White and the Seven Dwarfs was released in 1938.

After the success of Snow White, Walt Disney opened a new film studio called Walt Disney Studios. For about the next decade, Disney continued to focus on making full-length animated films. Some of his most popular early films include Dumbo, Cinderella, Alice in Wonderland,  and Peter Pan.

In 1955, Walt Disney opened the first ever Disneyland Theme Park. After the opening of this park, he resumed his focus on films. Before his death, he was able to complete the films Lady and the Tramp, Sleeping Beauty, One Hundred and One Dalmatians, and The Sword in the Stone.

Over the course of his career, Walt Disney earned over fifty awards and was nominated for almost fifty more. Below is a list of some of his most impressive awards, both given during his life and some posthumously.

Walt Disney married Lillian Bounds in 1925. This couple had two daughters together: Diane and Sharon.

Walt Disney died on December 15, 1966. The cause of his death was lung cancer. He was 65 years old when he passed away.