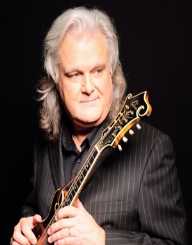 Musician Ricky Skaggs was born on the 18 July 1854 in Cordell, Kentucky to Hobert and Dorothy Skaggs. Both parents were bluegrass music enthusiasts, and Skaggs was exposed to music as a child.  When he was five years old, his father bought him a mandolin and taught him a few chords. The boy quickly showed musical ability.

Ricky Skaggs was six years old when the famous bluegrass musician Bill Monroe appeared at a concert in Martha, Kentucky. The local crowded called for Monroe to ask Little Ricky Skaggs play the mandolin with him onstage and the musician called up the boy. The following year, Skaggs performed with Flatt & Scruggs on their popular television show

After turning professional in 1971, Ricky Skaggs joined forces with a friend, country

Singer Keith Whitley and the due joined the bluegrass band of Ralph Stanley.  Skaggs left the group in 1973 and played in various bluegrass bands. In 1975 his solo bluegrass album That’s It was released on Rebel Records label.  And the same year, he also performed with J.D. Crowe & the New South on their album. Skaggs began playing country music in the late 1970s and joined Emmylou Harris’s Hot Band (1977-1980).

Skaggs then signed up with Epic Records as a Nashville country act and had some hit albums, including Waitin’ for the Sun to Shine (1981). Then in 1997 Skaggs setup his successful Skaggs Family Records. Skaggs formed the bluegrass band Kentucky Thunder.  Albums included Big Mon: The Songs of Bill Monroe (2000) and History of the Future (2001) and the group won seven Grammy Awards. Five of those awards were for the best bluegrass album in 1998, 1999, 2004, 2006 and 2008.

Ricky Skaggs continued recording, touring and producing innovative music. Skaggs produced two albums with Bruce Hornsby, one 2007 and another in 2012. Other work includes Salt of the Earth (2007) with the White family, Bluegrass Style (2011) and Hearts Like Ours (2014),

Ricky Skaggs married Sharon White in 1981, and the couple has two children, Lucas and Molly. His memoir Kentucky Traveler: My Life in Music (2013) was co-written with Eddie Dean.