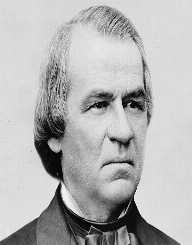 Andrew Johnson was born on December 29, 1808, in Raleigh, North Carolina, USA. His parents were Mary McDonough Johnson and Jacob Johnson. Sadly, his father died when he was very young, and his mother was left to take care of him on his own.

When Andrew Johnson was old enough to work, he and his brother William became apprentices in a local tailoring shop. He later ran away from his home and his job with his brother for a short while. The two eventually went back home before moving to Tennessee with their family. Once in their new home, Johnson opened a tailoring shop of his own as a means to support his family.

Andrew Johnson began his political career in 1829 when he was elected as an alderman (an alderman is a member of a municipal council). He continued to work in his tailoring shop while he held this position.

In 1834, Andrew Johnson was elected to be the mayor of Greeneville, Tennessee. Only a year later, he ran to become a member of the Tennessee State Legislature, which he won. While a member of this group, he made many of his opinions know. He was pro-slavery, a conservative spender, and supported state’s rights. Even though he was pro-slavery, he was still pro-union (the American Civil war had not happened yet).

In 1843, Andrew Johnson was elected as a Democratic member of the national Congress. Even while in Congress, Johnson made his pro-slavery viewpoint known. He knew that if slavery was abolished, then the country would fall about. He spent over ten years in Congress, and during his time there, the southern states' governments had discussed leaving the Union if slavery was abolished. It would not be long before Johnson’s prediction was proven right.

In 1853, Andrew Johnson ran an election to become the governor of Tennessee, which he won. While working as the governor, he also ran to become a Senator. He won this election, but he was not as popular nationally as he was within his state. Many other politicians were abolitionists and hated his pro-slavery stance. While a member of the Senate, Andrew Johnson tried to pass pro-slavery laws, but none passed. Still, he remained vocal in his pro-slavery stance, but also made it clear that he was pro-Union.

In 1860, after Abraham Lincoln was elected as the sixteenth president of the United States, Tennessee seceded from the Union. Even though Johnson lived in Tennessee at this time, he still considered himself to be a member of the Union and not the Confederacy. Because of this, he remained a United State’s Senator. Soon after, his land was taken from him by the Confederates, and he was forced to leave Tennessee.

During the Civil War, President Lincoln passed the Emancipation Proclamation, which essentially freed the slaves. While Johnson was still pro-slavery, he agreed with the proclamation, as he knew it would help to end the war. Then, in May 1865, the Civil War ended. The Confederate States joined the Union, and slavery was abolished throughout the whole country.

When Lincoln had run for his second term in office in 1864, he had made Johnson his running mate, making Andrew Johnson the vice president when Lincoln was elected. On April 14, 1865, Lincoln was assassinated by John Wilkes Booth, making Johnson the new president of the United States.

Once in the position of president, President Andrew Johnson appointed new governors to seven of the former Confederate states. Around the same time, Johnson began making plans for the reconstruction of the southern states.

Slavery had been a staple of the South's economy, and after losing the war and their slaves, many formerly rich white southerners were now impoverished. While the slaves were technically free, not many businesses were hiring African-Americans. Many former slaves ended up living on the same plantations as they had while they were slaves. They had to be paid now, but they often did not earn enough money to move away from their plantations.

One of the most important things that President Johnson ever did was purchase Alaska from Russia in 1867. Shortly before this, Canada was still a colony of England. The plan was to surround Canada and offer the colony freedom if it were to join the United States. However, England granted Canada freedom before this could be done, ruining President Johnson’s plan. However, buying Alaska was still a great purchase, as the area was and still is rich in natural resources, like oil.

President Andrew Johnson was a fan of vetoing any law that he did not like, many of which were because of his racist attitude. One of the laws he vetoed was one that would allow African-American males to vote. Even though he vetoed this, it still later became a law. Of course, he had the power and right to do this as president, but many of the members of Congress felt that this was grounds for impeachment. After a lengthy trial, President Johnson was impeached on March 30, 1867. He was the first American president to be impeached.

Andrew Johnson was given an Honorary doctorate from the University of North Carolina in 1865.

Andrew Johnson died on July 31, 1875, in Elizabethton, Tennessee, USA. His cause of death was a stroke. He was 66 years old when he passed away.