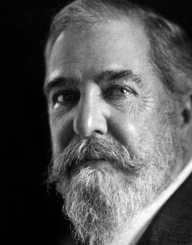 Louis Comfort Tiffany was born on February 18, 1848, in New York City. His father, Charles Lewis Tiffany, was the founder of the jewelry company Tiffany & Co. His mother’s name was Harriet Olivia Avery Young. He had three brothers and two sisters.

Tiffany began his education at the Pennsylvania Military Academy in West Chester, Pennsylvania. He then continued at the Eagleswood Military Academy in the city of Perth Amboy, New Jersey. He started studying art under the mentorship of the painters George Inness and Samuel Colman. He then spent a year studying at the National Academy of Design in New York City. He was also mentored by the artist Leon Adolphe Auguste Belly.

Tiffany began his career as a painter. He later gained an interest in glassmaking. In 1879, he started a business called Louis Comfort Tiffany and Associated American Artists. He worked together with painters Lockwood de Forest, Samuel Colman, and Candace Wheeler. They created designs for furniture, wallpapers, and textile fabrics. In 1882, he was commissioned by President Chester Alan Arthur to redecorate a few rooms in the White House.

In 1885, Tiffany disbanded his old business and started the Tiffany Glass Company. He created stained glass, which he named Favrile – the old French word for handmade. He produced lamps, pottery, and different decorations. He created a glass curtain for the Palace of Fine Arts in Mexico. He designed stained glass windows for the Arlington Street Church, the Second Presbyterian Church, the Pullman Memorial Universalist Church, and many other churches across the U. S.

Tiffany was a member of the Society of Fine Arts in New York City, Tokyo, and Paris. He was also a part of the Architectural League, the American Watercolor Society, and the Society of American Artists. In 1902, he became the Design Director of Tiffany & Co.

Tiffany’s works won numerous medals at expositions in Chicago, Paris, Saint Petersburg, Turin, Seattle, and Panama. The country of France awarded him with the National Order of the Legion of Honor. His collections are still at display at the Metropolitan Museum of Art, the Queens Museum of Art, the Montreal Museum of Fine Arts, and the Haworth Art Gallery.

Louis Tiffany passed away on January 17, 1933. He was 84 years old and he was buried at the Green-Wood Cemetery in Brooklyn.