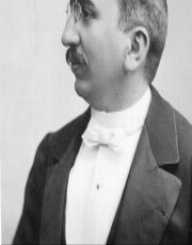 Louis Lumiere was born on the 5 October 1864 in Besançon, Doubs, France. His father, Antoine was a portrait painter and photographer who ran a business manufacturing photographic plates. From a young age, Louis Lumiere he was exposed to photography, photographic equipment, and art.

Louis Lumiere was a pupil at La Martiniere, a technical school.

After completing his education, Louis started working in his father’s photographic manufacturing firm in Lyon In 1881 Lumiere invented a dry plate process that was so successful that his father opened a factory and by 1894, the company was producing millions of plates per annum. By the late 1890s, the business was the most significant manufacturer of photographic plates in Europe.

In 1894 Antoine Lumiere had an opportunity to view a demonstration of Edison’s Peephole Kinetoscope in Paris. Antoine was inspired and encouraged his sons to fix the problems with Edison’s invention. The Kinetoscope main drawback was the inability to show a motion picture to more than one person. Their father instructed them to find a way to project the motion picture images onto a screen for multiple viewers to watch. The solution they came up with was the invention of the Cinématographe which they patented on the 13 February 1895. The Cinématographe which could record, develop and project motion pictures is considered by historians to be the first viable film camera.

The public response was overwhelming. Lumiere & Sons subsequently became the second most important photographic company internationally, and they created many iconic images on film including news, documentaries, and depictions of everyday life. They had teams of assistants who toured the world showing films as well as filming material depicting other countries and cultures. They also opened Cinématographe theatres in New York, London, and Brussels.

The brothers did not see a long-term future for cinema and in 1900 returned to concentrating on photographic equipment and processes. By 1907 they had produced the color photography process known as Autochrome Lumiere.

Louis Lumiere was married Rose Winckler in 1893, and they remained married until her death in 1925. The couple had three children. Louis Lumiere died on the 6 June 1948.