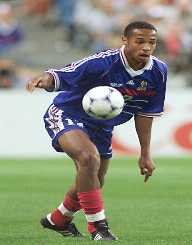 Thierry Henry was born on August 17th, 1977 in Les Ulis, France. He is a retired French footballer who assisted his French national team win the 1998 World Cup. His professional football career took off when he played for the French club AS Monaco. During this time, he was only 17 years old. He has also played for top league clubs such as Juventus, Arsenal, and Barcelona. It is while playing for Barcelona that he managed to lift the Champions League cup in the year 2008-2009. Later on, he surprised many after moving to the Major League Soccer (MLS) where he signed up to play with New York Red Bulls. After a short period, he came back to play for Arsenal on loan.

Thierry Henry was born on August 17th, 1977 to Antoine, his father and Maryse, his mother. He was raised in one of the suburbs of Paris called Les Ulis. This place is normally thought of as a bad neighborhood to grow up in. However, it provided Henry with top notch football skills right from the time he was young. At the age of 7 years old, his prowess in football was evident. This motivated Claude Chezelle to sign him up to one of the local youth football clubs called CO Les Ulis. Shortly after playing for this team, he moved to US Palaiseau where he played for a year. After this, he joined another youth team, ES Viry-Châtillon and played with them for another two years. In 1992, he joined the youth team of Monaco where he played until 1994.

While playing for the Monaco youth league, Henry impressed many including Monaco’s coach than Arsene Wenger. This contributed to his early professional debut for the Monaco senior team in 1994. Wenger believed in his football skills but preferred not to play him as a striker. Instead, he found it wise to play him as a winger as he would be a great tool in bringing balls to the middle. It is for this reasons that Henry did not appear in most games during his early professional career. Wenger wanted him to learn to play as a winger and not as a striker.

With time, Henry had become a master of his own game and helped Monaco clinch the League 1 title in 1996-1997 season. On the international scene, he made his first appearance in 1997 and went on to help France claim the World Cup trophy in 1998 after scoring three goals for them.

In 1999, Henry changed clubs and went to play for the Italian giants, Juventus. Sadly, he experienced a disappointing run in his career here as he only made 16 appearances and scored only three goals. This was terrible as he had scored 20 goals while playing in Monaco. The next season, he moved again to Arsenal joining his former coach Wenger. With Arsenal, Wenger honed his skills into a superb striker. He was at the height of his career while playing for Arsenal from 1999 to 2007. During this entire period, he managed to bag home up to 4 Premier League Golden Boot Awards. In addition to this, he was ranked second in the FIFA World Player of the Year awards for two times.

In the season of 2006-2007 Henry suffered some injuries which led to his departure from Arsenal in 2007. At this time, he was all-time leading goal scorer with 174 goals. Later on, he came back to play for Arsenal while on loan but scored only one goal to claim his goal scoring record to this day with 175 goals under his name. He also played for the Spanish league giants Barcelona from 2007 to 2010 and scored 35 goals in the process.

In 2010, Henry retired from his International career with over 100 appearances and 51 goals under his name. He continued with his football career, this time surprising many by playing for New York Red Bulls in the Major League Soccer.

Thierry Henry tied the knot with Claire Merry while he was still playing with Arsenal. Soon, the two divorced in 2007. They had one daughter named Tea.