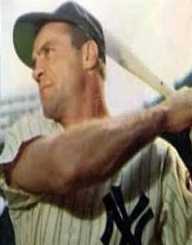 American baseball great Hank Bauer was born on the 31 July 1922 in East St. Louis, Illinois. He was the youngest in a family of nine children. His family was of modest means, and his father worked as a bartender.

Hank Bauer's brother Herman was a minor leaguer with the Chicago White Sox and arranged for his younger brother to have a tryout. Bauer was offered a contract, and in 1941, he began his professional baseball career when he joined Oshkosh of the Class-D Wisconsin State League. At the same time, Bauer was training as a union pipe-fitter, and his first job was fixing furnaces at a bottling plant.

After the bombing of Pearl Harbor, Hank Bauer joined the US Marines in January 1942. He served in the Pacific for three years. During that time he volunteered as a Raider and was made a Platoon Sergeant. He suffered shrapnel wounds to his back and thigh as well as contacting malaria. Commanding a 64-man platoon on Okinawa, he was wounded, and 58 others were killed. Due to the severity of his wounds, he was sent home. A decorated marine, Bauer was awarded two Purple Hearts and two Bronze Stars as well as various campaign ribbons.

Returning home from the war Hank Bauer resumed his job as a pipe-fitter until Danny Menendez who was a scout for the Yankees signed him as a free agent. He spent the 1946 season with Quincy of the Three-I League. Playing 108 games, he hit .323 with 90 RBIs and was promoted by the Yankees to their top farm team in Kansas City. He had another excellent season with Kansas City in 1948, and at age 26, Bauer made his debut with the Yankees.

Bauer went on to be a three-time All-Star outfielder and to be part of the Yankee teams that won nine American League pennants and seven World Series in 10 years. He also set the Series record with a 17-game hitting streak (1948-1959). Bauer played his last two seasons with the Kansas City Athletics (1960-1961).

As a manager, Hank Bauer managed the Kansas City Athletics (1961-1962). After the Athletics won 107 games and lost 157 and finished 9th in the ten-team American League on two occasions, Bauer was fired at the end of the 1962 season. For the 1963 season, he was appointed a first-base coach with the Baltimore Orioles, and in November 1963, was named manager. Baltimore finished 3rd in the 1964 American League pennant. Then in 1966, the team won its first American League pennant and World Series championship.

Due to injury to their star outfielder Frank Robinson and other factors, the team finished in the second division in 1967. In 1968 the Orioles entered the All-Star break in third place with ten and a half games behind the Detroit Tigers, Bauer was dismissed. He returned to the Kansas City Athletics,  now based in Oakland, for the 1969 season but was fired for the second time. Bauer’s managerial record stands at 596-544. He managed the Tidewater Tides (1971-1972) before retiring.

As a baseball player with the Yankees, Bauer had the longest hitting streak in World Series history in 17 consecutive games between 1956 and 1958.

Hank Bauer met and married Charlene Friede in 1949. They had four children: Hank Jr., Herman, Bebe, and Kelly and remained married until her death in July 1999. Hank Bauer died on the 9 February 2007 from lung cancer. He was 84 years of age.