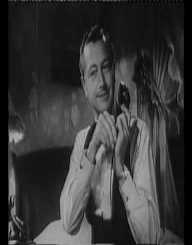 Walter Lang, an American Film Director of reputation, was born on August 10, 1896, in Memphis, Tennessee, United States of America. The whereabouts of his early life are mostly unknown. He served the US Army in France during the World War I. He found a clerical job in a film production company in New York upon his return from France after the end of the First World War. His association with the film production company aroused his interest in filmmaking. He started observing the various facets including the subtler points of filmmaking with his natural artistic instincts. After a while, he was appointed as Assistant Director of the company and used the opportunity to work under different directors of small banners.

Walter Lang was given his first break by Dorothy Davenport in 1925 when she entrusted Walter to direct his first silent film ‘The Red Kimono independently.’ The film was based on the life of a prostitute whose real name was used. The prostitute sued Davenport and succeeded in getting a hefty amount from her. Over the next four years, Walter made 12 more silent films at various studios. In 1929, he made his last silent film ‘The Spirit of Youth.’

With the advent of sound in filmmaking, Walter Lang switched over to making talkies under several small banners like Sono Art-World Wide and Tiffany and made several films during the period from 1929 to 1930. ‘Hello Sister,’ ‘Cock o' the Walk,’ ‘The Big Fight,’ ‘The Costello Case’ and ‘The Brothers’ were the films he made during the year 1930. Among these films ‘The Brothers’, produced and released by Columbia Pictures, a small filmmaking company at that time, made some impact among the masses. During 1931, he made three more films, ‘Command Performance,’ ‘Hell Bound’ and ‘Women Go on Forever’.

However, frustrated and fed up with working under small banners, Walter Lang went to France and joined the great gathering of artists and writers in the Montparnasse Quarter of Paris, France to fulfill his ambition of becoming a painter. Things did not work out as expected and Walter realized that it was not his call to be a painter. He came back to New York and directed his second film with Columbia Pictures titled ‘No More Orchids.’ The film was released on November 25, 1932, but eluded the coveted box office success in spite of the presence of stars like Carole Lombard portraying the character of Ann Holt.

Despite the elusive box office success, Walter Lang continued to make films and made a few significant films over the next three years including the likes of ‘Meet the Baron’ (1933), ‘The Party's Over’ (1934), ‘Love Before Breakfast’ (1936). However, all these films largely remained unsuccessful regarding their box office collection. During the mid-1930s, he was hired by the renowned film production house 20th Century Fox, and he celebrated his association with the film-making giant with his innocuous Loretta Young soap opera ‘Wife, Doctor and Nurse’ (1937), inaugurating his long innings under the said banner.

Walter Lang went on to make a total of 34 films under the banner during a period spanning four decades. Among these 34 films, there were many spectacular colourful musicals for which 20th Century Fox earned a name during the 1940s. It was for the first time Walter Lang had the privilege of working with front-line actors and excellent scripts. He hit the bull's eye with his 1939 release ‘The Little Princess,’ his fourth film with Fox which became a major hit and garnered a good collection at the box office. His next film ‘The Blue Bird’ was released in 1940 and was straightaway rejected by the box office. However, the film earned two Academy nominations and is regarded as one of his most significant films.

The first of his many romantic musicals is his 1940 release ‘Tin Pan Alley.’ It has a star-studded cast of Alice Faye, Betty Grable, John Payne and Jack Oakie in the lead roles. The periodical musical received an Oscar for its music, which was done by Alfred Newman. The film had a resounding box office success. Walter Lang followed the success of ‘Tin Pan Alley’ with another musical ‘Moon over Miami.’ The film was released on June 18, 1941, and was an even greater hit. It was the story of two sisters who went husband hunting in Miami. Betty Grable and Carole Landis were cast as the two sisters opposite Don Ameche who was roped in to essay the role of the male lead.

Walter Lang delivered two more musical hits in the form of ‘Weekend in Havana’(1941) and ‘Song of the Island’(1942) before switching over to a non-musical comedy titled ’The Magnificent Dope.’ The film had an enviable star cast of Henry Fonda, Don Ameche, and Lynn Bari and was released on July 1, 1942. Returning to musicals again, he made ‘Coney Islands.’ The film was released on June 11, 1943, and had a star cast of Betty Gable and Kate Farley. The film was a significant hit.

Walter Lang then continued to churn out more hit films and made ‘Greenwich Village’ and ‘State Fair’ in 1944 and 1945 respectively. Both the films earned handsomely at the box office. In 1946, he released two more films in quick succession. ‘Claudia and David’ and ‘Sentimental Journey’ were released on February 25 and March 6 respectively, and though the latter was unable to attract a positive review, both the films were box office successes.

In 1956, Walter produced his magnum opus film ‘The King and I.’ It was an adaptation of the classic Rodgers and Hammerstein show The King and I, which premiered on Broadway in 1951. As the top director of musicals, it was a challenge thrown to him by the Fox management to convert the classic into a film. The film was nominated for nine Academy Awards including the category of direction. Walter failed to win the Oscar Award for direction. However, the film won the award in five other categories.

Walter Lang married Madalynne Field in 1937. She was a former actress and a close friend of Carole Lombard. They were blessed with a son, Richard Lang, who later became an acclaimed film director following his father’s footstep.

Walter Lang died on February 7, 1972, and was interred in the Inglewood Park Cemetery, in Inglewood, California.