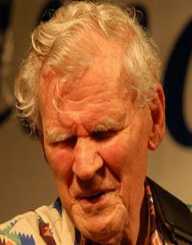 American bluegrass, country and folk musician Doc Watson was born Arthel Watson on the 3 March 1923 in Deep Gap, North Carolina in Watauga County. Before his first birthday, he lost his sight due to an eye infection and was declared legally blind. His father was General Dixon Watson, was a church choir director and his mother, Annie Green, sang gospel hymns to her children.

In 1933, Doc Watson was enrolled in the Governor Morehead School for the Blind in Raleigh.

When Doc Watson turned eleven, his father gave him a banjo he had built for him and taught him how to play it. His father had a significant influence on his life and encouraged his son to succeed, despite his blindness. When he was 13, his father gave him an inexpensive guitar, and Watson taught himself to play. He began playing on the streets of Lenoir, North Carolina. His playing skill was noticed, and he was invited to perform on various shows around town. A radio announcer gave him the nickname Doc.

Doc Watson joined the Jack Williams’ band, the Country Gentlemen, in 1953 and it was around this time that he began to develop his flat-picking style. The Williams’ band also started using the electric guitar. Because the band did not have a fiddle player, Watson invented fiddle sounding tunes using his flat-picking. He was first noticed by the folk music community when old-time banjo player and singer Clarence Ashley was recorded in a session with friends and neighbours which included Watson.

The recordings were released as Old Time Music at Clarence Ashley’s, and Watson’s talent on the recordings was noted. In 1961, Watson accompanied Ashley, Fred Price and Clint Howard to New York where they performed in a concert staged by Friends of Old-Time Music. In 1963 and 1964, Watson appeared at the Newport Folk Festival He also recorded his first album in 1963 for Vanguard Records.

Doc Watson toured the country frequently, and during the 1960s and 1970s, his son Merle accompanied him. Merle managed the concerts and gigs, as well as playing backup guitar for Watson. After Merle died in a farm accident (1985), Watson started holding an annual concert called the Merlefest in honour of his son. The festival is held in the town of Wilkesboro every April. After Merle died, Watson took time off playing. Then resumed with his grandson Richard, Jack Lawrence, and others. He recorded Third Generation Blues (1999) with Richard. Watson also played with Richard in the band Frosty Morn in the early 2000s.

Doc Watson was highly regarded and won many awards including the presidential National Medal of the Arts which was presented to him by President Bill Clinton. In 1997, he was given an honorary degree from the University of North Carolina.

Watson won seven Grammy awards, and in 2004, he was honoured with the Lifetime Achievement Awards.