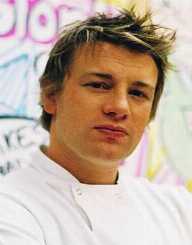 James Trevor Oliver also was known as Jamie Oliver is a Celebrity Chef, media personality, and restaurateur. His net worth is about 400 million dollars. He is known for his cuisine, television series, The Naked Chef and for campaigning for healthier diets for British school children. He owns Barbecoa, Jamie Oliver's Diner, Union Jacks, Fifteen and Jamie's Italian.

Jamie Oliver was born on May 27, 1975, in Clavering, Essex, England to The Cricketers pub/Restaurant owners Trevor and Sally Oliver. Growing up he worked in his parent's restaurant, and that encouraged his career choice.

After he finished from Westminster, Jamie Oliver went to work at Neal Street Restaurant owned by Antonio Carluccio as a Pastry Chef. Here, he learned the art of Italian cuisine from Gennaro Contaldo who became his mentor. He employed Gennaro Contaldo later in life to manage his string of high-end restaurants, Jamie's Italian.

After Neal Street, he moved to The River Café, Fulham as a Sous Chef. Here he was discovered by BBC in 1997, after an unscripted appearance of Christmas at The River Café.

His television series, The Naked Chef, kicked off in 1999, and his cookbook was a No one bestseller in the entire United Kingdom. He was a bit worried about the name and also that people watching would think that he would be cooking naked. However, the network assured him that people would see it for what it was - pure, bare, stripped down cooking. To crown off his success that year, Prime Minister Tony Blair, invited him to No 10, Downing Street, to prepare lunch for him.

After a successful three series with BBC, Jamie moved to Channel 4 in the United Kingdom, and his series was a documentary titled Jamie's Kitchen. It was during this time he set up Fifteen which was as a result of the show. It is a charity restaurant set up to help people from disadvantaged backgrounds get a career in the hospitality business. Fifteen has franchises in Cornwall, Amsterdam, and Melbourne.

In 2000, Jamie Oliver was the face of Sainsbury's, the supermarket chain. This collaboration lasted 11 years. The deal was an average of 2 million dollars per year. He soon started a campaign to serve the average British school child healthy food in place of junk food. It was called ‘Feed me Better.' Although not everyone believed in this cause, Jamie did, and he started off a new show called Jamie's Ministry of food in which he travels around Yorkshire to eat healthier. He also had a show that ran from 2010-2011 called Jamie's food revolution doing the same in the U. S.

In 2008, he launched his restaurant Jamie's Italian, it has at least 35 outlets, and the franchise is scattered worldwide.

Jamie Oliver doesn't claim any other religion apart from food; although he once declared the Church of England.

In July 2000, Jamie Oliver married Juliette Norton. They have five children and are known for their creative ways of naming them. They are Poppy Honey Rosie, Daisy Boo Pamela, Petal Blossom Rainbow, Buddy Bear Maurice and River Rocket.

Jamie Oliver has a severe case of Dyslexia. He read his first novel, Suzanne Collins' Catching Fire, in 2013.

He has written about 23 books since his first book Something For the Weekend. Some of them include The Naked Chef, Jamie's America and his most recent, Jamie Oliver's Christmas cookbook.

Although Jamie Oliver is an excellent chef, his most notable awards come from his charity and contribution to humanity.