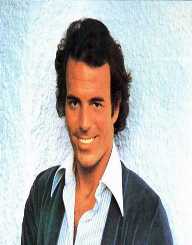 Julio Iglesias is a Spanish singer who is the most commercially successful European singer commercially in the world.

Julio Iglesias was born in Madrid, Spain on 23 September 1943. His parents are, Maríadel Rosario de la Cueva y Perignat and Julio Iglesias. Iglesias’ father was a leading gynecologist in Spain. Iglesias studied law at CEU San Pablo University. Iglesias also had a strong love of football. He was a professional player for Real Madrid and played as a goalkeeper for their second team, Real Madrid Castilla. A car accident ended his football career. Iglesias damaged his spine and legs in a car crash. He was unable to walk unaided for nearly two years and required physical rehabilitation therapy for years afterward. While in hospital and recovering from his injuries he was given a guitar. With little else to do Iglesias learned to play and discovered a talent for music. When he finally left the hospital, Iglesias went to Cambridge in the UK to study the language. Upon his return from Cambridge, he completed his law degree at the Complutense University of Madrid.

Iglesias’ music career began in 1968 when he won an international songwriting contest in Benidorm, Spain. Iglesias performed, La Vida Sigue Igual, which he had written. After his victory, he signed with Columbia Records’ Spanish label, Discos Columbia. He released a debut album titled, I Sing. I Sing would reach number three in the Spanish charts. He represented Spain at the 1970 Eurovision Song Contest in Amsterdam. Iglesias wrote the lyrics and the music for Spain’s entry, Gwendolyne. Iglesias wrote the song about his first girlfriend. He performed ninth on the night of the contest and ultimately finished fourth losing out to Ireland’s Dana. Iglesias would release in Gwendolyn in German, French, Italian, English as well as his native Spanish.

Iglesias also sang in his father’s native Galician. Un Canto A Galician was a major hit single for Iglesias, it would sell a million copies in Germany alone, and was sung in Galician. After his performance in the Eurovision Song Contest, Iglesias released some albums in quick succession. Some of his best-known albums at this time were, Soy from 1973, A flor de piel released in 1974 and 1975’sEl Amor. These albums were only released in Europe and Latin America but would receive U.S.A releases when Iglesias moved there later in his career. Although he predominantly performed in Spanish, he also released some foreign language singles.

In 1975, Julio Iglesias recorded If You Leave Me, It Can’t Be, in Italian and it was a big success in Italy. Similarly, he released a French single titled, Je Nai pas change, in France. In 1979, Iglesias moved to Florida to improve his chances of breaking the American market. In America he gained attention for his multilingual performances, adding Portuguese to the list of his languages. The first album Iglesias released following his move to America was De Nina a Mujer. It saw him gain his breakthrough in the English language with the single, Begin the Beguine. The song was a cover of the Cole Porter original. It reached number one in the U.K. His next album, 1100 Bel Air Place sold over three million copies in the U.S.A. It was a predominantly English album and featured some love songs. It received platinum status in both the U.S.A and Canada. The album also features duets with established American singers, Willie Nelson and Diana Ross.

Iglesias also continued to release Spanish material, and in 1987 he released Un Hombre Solo, which went multi-platinum in Argentina, Mexico, Brazil, Columbia, Spain, and Chile. He released a crossover album in 1988, titled Non-Stop, which featured a duet with Stevie Wonder. In 2003, Iglesias’ album, Divorce, reached number one in Italy, France, Russia, Spain, and Portugal. It also reached the top ten on the Billboard Latin charts. This was followed by a world tour that sold out many venues within days. 2006 brought the release of an English language cover album, Romantic Classics, which enjoyed moderate success and was widely promoted by Iglesias appearing on some major U.S.A TV shows.

In 2008, Iglesias began recording in Filipino and Indonesian to build on his Asian following. Iglesias’ single, The Sea, featured in the film, Tinker, Tailor, Soldier, Spy, which also featured music from Dana, who had beaten Iglesias in the 1970 Eurovision Song Contest. Iglesias was recognized as the best-selling artist ever in China in 2013. The Guinness World Records have also named Iglesias the best-selling Latin male artist and best-selling European artist of all time. He has released records in fourteen different languages.

Julio Iglesias married Isabella Preysler in 1971. Preysler is a Filipina journalist. They have three children together, Chabil, Julio, and Enrique. Both Julio and Enrique would follow in their father’s footsteps, with Enrique becoming a world famous performer. Iglesias and Preysler divorced in 1979. He then began living with Miranda Rijnsburger. Rijnsburger is twenty-two years Iglesias’ junior. They married in 2010 and had five children together, Alejandro, Rodrigo, Cristina, Victoria, and Guillermo. Iglesias’ main residence is in Indian Creek, Florida. He also owns some properties in the Dominican Republic and became a citizen of the country in 2005.

In 2008, Iglesias performed with Guinara Karimova, the daughter of the dictator of Uzbekistan.