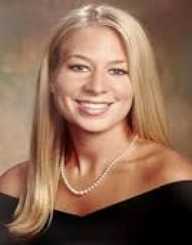 Natalee Ann Holloway was born on October 21, 1986. She was an American who disappeared and has never been found to date. She was declared dead in absentia on January 12, 2012. She made international news when she vanished on May 30, 2005 while on a school trip to Aruba in the Caribbean. In 2005, she graduated from Mountain Block High School before the trip. The case remains unsolved to date.

Natalee Ann Holloway was born on October 21, 1986, in Clinton in Mississippi in the United States of America. She was born to David Edward and Elizabeth Ann Holloway. In 1993, her parents divorced. She was brought up alongside her brother, Matthew. They were both raised by their mother after the divorce. In 2000, her mother got married to George.

Later on, the family moved to Mountain Brook in Alabama. She attended Mountain Brook High school where she graduated from with honors. At the school, she was a member of the National Honor Society. Before the disappearance, she was to join the University of Alabama on a full scholarship.

On May 26, 2005, Natalee Holloway and some of her classmates travelled to Aruba for a graduation trip. They travelled with seven chaperones that were to take care of them and keep them safe. Ann was last seen on May 30, while leaving the Oranjestad Bar and Nightclub Carlos’n Charlie’s. She left the club with Joran Van Der Sloot who was a student at the International School of Aruba, and Deepak and Kalpoe.

She was to board the flight for home later that day, but she did not appear. All her luggage and passport were found in her hotel room. The Aruban authorities searched for her all over the Island, but she could not be found. To date, her body has never been found, and there is no theory which satisfies where she might have gone to.

Investigations did earlier show that Natalee Holloway was returned to her hotel by Joran but was later approached by another man who wore clothes resembling those of a security guard. Joran said that that s the last time he saw Holloway. After many investigations, searches and detentions, Holloway was still not found. So many misleading theories were presented but none led to the finding of Ann. Her blood, hair or clothing has never been found. It is not known for sure if she is dead or she is being detained by her kidnappers.

In 2011, Natalee Holloway's father filed a petition at the Alabama Court to have her daughter declared legally dead.  Elizabeth showed an intention to oppose the petition after she was served. In the same year, Judge Alan King in a trial that was conducted after the petition was instituted held that Ann’s father has met all the requirements that would lead to a legal presumption of death. In 2012, a second hearing was conducted and Judge King signed and attested to an order that declared Natalee Holloway to be dead. Natalee was therefore declared dead in absentia in January 12, 2012.