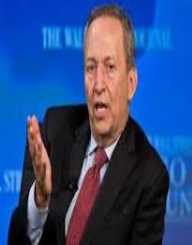 Lawrence Henry Summers was born on November 30, 1954, in the city of New Haven, Connecticut. His parents, Robert Summers and Anita Arrow Summers, were economists and professors at the University of Pennsylvania. His paternal uncle, Paul Samuelson, and his maternal uncle, Kenneth Arrow, both won the Nobel Prize in Economics. He spent his childhood in Penn Valley, a suburb of Philadelphia, Pennsylvania.

Lawrence H. Summers was a student at Harriton High School. In 1971, he enrolled at the Massachusetts Institute of Technology. He initially wanted to study physics, but he later switched his major to economics. He earned his Bachelor of Science degree in 1975. He continued his education at Harvard University, earning his Ph. D. in 1982.

In 1983, Lawrence H. Summers became a professor at Harvard University. That same year, he served on the staff of President Reagan’s Council of Economic Advisers. In 1988, he was the economic adviser to Michael Dukakis’s presidential campaign. In 1991, he left Harvard and joined the World Bank. He served as Chief Economist and Vice President of Development Economics. In 1993, he left the World Bank and joined the Clinton administration. He initially served as Undersecretary for International Affairs.

In 1995, he became Deputy Secretary of the U. S. Department of the Treasury. In 1999, he was promoted to Secretary of the Treasury. From 2001 to 2006, he served as President of Harvard University. After that, he became the managing director of the hedge fund D. E. Shaw. He was a consultant to financial institutions such as Goldman Sachs, Merrill Lynch, Lehman Brothers, and JPMorgan Chase. In 2009 and 2010, he served as director of the National Economic Council. After that, he kept working as an advisor to companies such as Andreessen Horowitz and the NASDAQ OMX Group. He joined the board of directors of Square, Lending Club, and Premise Data. He also resumed his job as an economics professor at Harvard.

In 1987, the National Science Foundation gave Lawrence H. Summers the Alan T. Water Award. In 1993, the American Economic Association awarded him with the John Bates Clark Medal. In 2018, the New York Association for Business Economics gave him the William F. Butler Award.

Lawrence H. Summers received considerable criticism for his decisions during his time in the Department of Treasure. He also attracted plenty of controversy during his Harvard Presidency. He criticized African-American professor Cornel West, made terrible comments about women in science, supported Russian economist Andrei Shleifer, and received donations from sex offender Jeffrey Epstein. Many professors and students at Harvard demanded his resignation.

From 1984 to 2003, Lawrence H. Summers was married to Victoria Joanne Perry. They had a son named Harry and twin daughters, named Pamela and Ruth. In 2005, he married Elisa New, a professor of English literature.