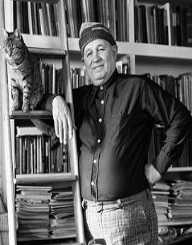 Romare Bearden was an African African-American artist, author, and songwriter. Born on September 2, 1911, he was a founding member of The Spiral, an art group based in Harlem. The group was aimed at discussing responsibility and what the African-American artist could contribute in the struggle for civil rights. Members of the group included Hale Woodruff, Norman Lewis, Willian Pritchard, Charles Alston, Reginald Gammon, James Yeargans, and Richard Mayhew among several others. Bearden explored varieties of media including collages, cartoons, and oils.

Romare Bearden nwho started his career painting scenes of the American South later attempted to express the lack of humanity in the world through his works. Apart from his artistic works, he was also an author and songwriter. He was a co-writer of the jazz classic “Sea Breeze” recorded by Billy Eckstine and Dizzy Gillespie. Along with his wife, he founded the Bearden Foundation to support young and emerging artists. He received several awards and honors and had been named after numerous facilities.

Romare Bearden was born on September 2, 1911, in Charlotte, North Carolina to Bessye Bearden andRichard Howard Bearden. His mother was a correspondent for The Chicago Defender and the founder and president of the Coloured Women’s Democratic League. At a very young age, the family moved to New York City. While there, the Beardens family home became a meeting place for intellectuals and artist of the Harlem Renaissance. Growing up he traveled a lot between Pennsylvania and Pittsburgh.

Romare Bearden received education at Peabody High School in Pittsburgh, Pennsylvania where he graduated in 1929. He enrolled at Lincoln University but later transferred to Boston University. There he was the art director for the University’s student humor magazine called “Beanpot.” He continued his education at New York University, where he pursued art, science, mathematics, and education. He became an editor and lead cartoonist for The Medley, a monthly journal by the Eucleian Society(a secretive student society at NYU). He graduated from NYU with a with a degree in science and education in 1935. With his great interest in arts, he studied at the Art Students League under German artist George Grosz from 1936 to 1937.

Bearden’s life experiences influenced his style of work. His early works were mostly scenes in the American South. The Mexican muralists, specifically Jose Clemente Orozco and Diego Rivera, influenced his style during this period. He became a case worker for the Harlem office of the New York City Department of Social Services in 1935.

Romare Bearden joined to the United States Army during the World War II. He served in the army from 1942 to 1945. After his military service, he joined the avant-garde Samuel Kootz Gallery. His works were in "an expressionistic, linear, semi-abstract style." Under the GI Bill, he had the opportunity to further his education in France in 1950. While there, he studied philosophy under Gaston Bachelard and art history at the Sorbonne. He also traveled throughout some parts of Europe visiting several artists including Picasso.

His travel through Europe influenced his style of work as he embraced abstract painting and started producing works that reflected what he considered human. Most of his works now were scenes from the Passion of the Christ. His war experience also impacted on his work as he depicted the non-existence of humanity during the war.

Romare Bearden exhibited his works at the Samuel M. Kootz gallery. His works on the Passion of the Christ had a spiritual than the perceived emphasis on the Biblical interpretation of Christ and the Crucifixion. His work in the Passion of the Christ includesGolgotha, Cotton Workers. His works became too realistic for an abstract gallery like Sam Kootz and were, therefore,showed the exit.

He then went into music co-writing the hit song Sea Breeze, recorded by Dizzy Gillespie and Billy Eckstine. Still, into painting and studying works of Pieter de Hooch, Johannes Vermeer, and Rembrandt, his works became more abstract and started exhibiting again in 1960. He joined the New York City-based Cordier and Ekstrom Gallery in 1961. He would exhibit his works at the gallery for the rest of his career. He organised the exhibition called Projections, in 1964, which he used to showcase his new collage style.

Romare Bearden used his works to drum home the importance of unity and cooperation among African Americans. An example of such piece is The Visitation, which depicts the relationship between two black women holding hands. In 1942, Forbes magazine commissioned him to produce Factory Workers for their article The Negro’s War. The Negro’s War article"examined the social and financial costs of racial discrimination during wartime and advocated for the full integration of the American workplace.”

In 1960, his works were representationally inclined and socially conscious. He embraced the collages using clippings from magazines. His works include Baptism, The Art of Romare Bearden, The Return of Odysseus, andA60-foot-by-13-foot tile mural he created in the Gateway Centre subway in Pittsburgh was worth $15 million. The project, christened "Pittsburgh Recollections” was installed in 1984 with Bearden receiving a commission of $90,000.

Romare Bearden married a 27-year-old dancer, Nanette Bearden in 1954. He was 42 years at the time. The couple established the Bearden Foundation to help young artists. Romare Bearden died on March 12, 1988, in New York City from bone cancer.