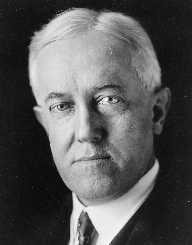 Frank B. Kellogg alias Frank Billings Kellogg was a famous American lawyer, statesman, and a politician. He was the 45th U.S. Secretary of State and that he also offered his services at the U.S. Senate. In 1929, Kellogg was honored with a Nobel Prize following his work in authoring the Kellogg–Briand Pact.

Frank Billings Kellogg was born on December 22nd, 1856. His birthplace was in Potsdam, New York. He was the eldest son of Frederick A. Kellogg and Amy F. Kellogg.

After Frank Kellogg's family relocated to Minnesota in 1865, he began training himself to practice law in 1877. The following year, Kellogg was appointed to serve as the Rochester attorney. This is a post he held from 1978 to 1881. After this, he went on to represent the county of Olmsted, Minnesota for five years. He took this post in 1882 ending his term in 1887.

Years later, in 1905 Kellogg became a part of the federal government. This was after Theodore Roosevelt asked him to prosecute a case that was related to the government. The following year, he was chosen to serve at the Interstate Commerce Commission as one of its special counsel. Two years later, he was again appointed to take the lead in the government prosecution against the Union Pacific Railroad that was under the Sherman Antitrust Act.

During his entire career as an attorney, Kellogg is to be remembered for the Standard Oil Co. of New Jersey v. United States case. This case brought him high acclaim. Accordingly, he was later chosen to serve as the American Bar Association’s president for one year. He took this role in 1912 before he was succeeded in 1913.

In 1916, Frank B. Kellogg was elected to the U.S. Senate under the Republicans flag. He began offering his services in March the following year until 1923. During the signing of the Treaty of Versailles, he was one among those who actively supported its ratification. In 1922, Kellogg lost the election as he tried to vie for another chance to serve in the Senate position.

Following his defeat to the senatorial position in 1922, President Calvin Coolidge gave Frank Kellogg a job as the U.S. Ambassador to the United Kingdom. He began serving on January 14th, 1924 to February 10th, 1925 when Alanson B. Houghton replaced him. He was only replaced so that he would take over as the next Secretary of State.

Frank Kellogg was appointed as the U.S. Secretary of State in 1925. He remained in this post until 1929. This was under the administration of Calvin Coolidge. Later on, in 1928, he was honored with Freedom of the City first in Dublin and after that in Ireland. During his term as the Secretary of State, he was credited with trying to improve relations between the U.S. and Mexico. He was also a prominent figure in resolving the Tacna–Arica controversy that stood between Chile and Peru. Nevertheless, he is best remembered for the Kellogg–Briand Pact that was sanctioned in 1928.

Frank Kellogg married Clara May Cook in 1886. She was the daughter of Elizabeth Cook and George Clinton Cook. The two had no children in their marriage.

Frank B. Kellogg died on December 21st, 1937. He had been suffering from pneumonia which led to his death at the age of 80.