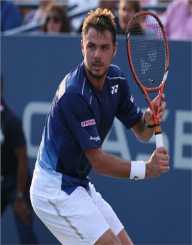 Stan Wawrinka was famously known as “Stan," is a Swiss professional tennis player born in March 28th, 1985. He won a Grand Slam title in the 2014 Australian Open followed by 2015 French Open. He also won the same title in the 2016 US Open. This makes a total of Three Grand Slam titles. Additionally, the skilled player won in the men's doubles at the 2008 Summer Olympics. Therefore, he earned himself a gold medal.

Stan Wawrinka had to sacrifice his education at the age of fifteen to focus on his career as a Tennis player. In the year 2002 is when he became a professional tennis player. He was only 17 years old at the time. He became more famous in 2007 when he became among the Top 50 players in the ATP list. Furthermore, he managed to reach round three of the Australian Open. Also, he advanced to round two of the French Open. In May 2008, Stan Wawrinka was ranked among the top ten in the ATP list and position three by January 2014.

Not much is known about Stan Wawrinka’s early life except that he was born on March 28th, 1985. His place of birth was in Lausanne, Switzerland.

Stan Wawrinka was only eight years old when he began playing tennis with Dimitri Zavialoff as his coach. He coached the boy till June 2010. At the age of fifteen, he dropped his education and focused on the sport. Later in 2002, the young 17-year-old became a professional tennis player.

In July 2004, Stan Wawrinka along with his partner Marc Rosset advanced to the finals in doubles at Gstaad. This was his first time to reach the finals. However, the pair was beaten by David Rikl and Leander Paes. By the end of this year, he was ranked position 162 globally.

In 2006, he participated in the Croatia Open Umag where he won an ATP title which was his first ever. By October of this year, he was position 29 in the world rankings. The following year, progressed to round three at the Australian Open. However, he lost to Rafael Nadal. Stan Wawrinka also participated in the French Open and won against Wawrinka. Still, in 2006, he reached round four at the US Open.

In 2013, Stan Wawrinka was inducted into the forces, and his career took off to greater heights. In this year he participated in the Portugal Open and won his fourth title. The next year, at the Australian Open, he beat Djokovic in the quarter-final. In the finals, he won against Rafael Nadal the no. 1 ranked player. As a result, he earned a Grand Slam championship which was his very first.

In 2015, during the Australian Open, Stan Wawrinka progressed to the semifinals. He won at the French Open though and won a Grand Slam title for the second time.

In 2009, Stan Wawrinka tied the knot with Ilham Vuilloud, a Swiss television personality. Together they were blessed with a daughter, Alexis. The couple later separated in 2015.