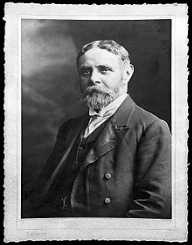 Alexandre Yersin was born on September 22, 1863. He was a bacteriologist. He is known for discovering the Yersinia pestis.

Alexandre Yersin was born on September 22, 1863, in Aubonne, Switzerland. He was born to Alexandre Yersin who was a teacher of natural sciences and his wife. His father died two weeks before he was born. He was interested from a very young age. His love for nature drove him to collect insects that he studied keenly. He grew up Morges and attended school in Lausanne. He later joined the University of Marburg. He then attended the Paris Faculty of Medicine. At the Paris Faculty of Medicine, he worked in a laboratory which was owned by Professor Andre Victor at the Hotel Dieu.

While Alexandre Yersin was conducting an autopsy on a dead patient who has succumbed to rabies, he cut himself and Pierre Paul Emile, a fellow bacteriologist, came to his rescue. Paul injected him with a new therapeutic serum which saved his life. In 1886, he was invited by Paul to join the Louis Pasteur’s Research Laboratory of Ecole Normale Superieure. He joined Paul in the developing of the anti-rabies serum. In 1888, he obtained his Ph.D. Degree. The same year also saw him acquire French nationality.

In 1889, in collaboration with Paul, Alexandre Yersin isolated a toxin secreted by the diphtheria bacillus. In 1890, he became a physician aboard a steamship which operated off the coast of French Indochina. In 1894, he was privileged to visit Hong Kong where he investigated the Manchurian Pneumonic Plague epidemic. In the same year, he discovered the pathogen that causes plague, the pathogen is known as Yersinia pestis. In 1895, he went back to the Institute Pasteur, Paris where he prepared the first anti-plague serum in collaboration with Paul, Albert Calmette, and Amedee Borrel.

In 1895, Alexandre Yersin continued his research on the bubonic plague. He tried the serum he got from Paris, but it was not a success. He later settled in Indochina where he participated in the advancement of medical science. In 1902, he assisted in the establishment of the Hanoi Medical University. He also became the first Medical Director of the University. In 1934, he became the Honorary Director of Pasteur Institute. He also became a member of the Institute’s Board of Administration.

In 1927, Alexandre Yersin received the Leconte Prize for his discovery of Yersinia pestis.

Alexandre Yersin never married hence he did not have children. He died on March 1, 1943, at his home in Nha Trang in Vietnam. He died at the age of seventy nine.