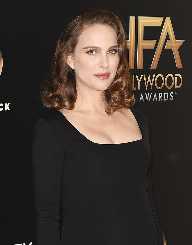 Natalie Portman is a producer, director, and actress. She has dual citizenship of United States of America and Israel. Natalie was born in Jerusalem, Israel on June 9, 1981. Her father was an Israeli while the mother was an American. She grew up majorly on Long Island, New York where she nurtured her modeling desire. She started modeling when she was as young as 11 years old with her first breakthrough being a 1994 action thriller "The Professional." She was later cast in the "Star Wars" as Queen Amidala. Her acting star rose sharply after she won awards including the 2010 Best Actress Oscar.

Natalie Portman was born in Jerusalem to an Israeli father and an American mother. She was named Neta-Lee, a Hebrew name but later changed to Natalie. Her father, Avner Hershlag, was a fertility specialist and a gynecologist while her mother, Shelley, was an American homemaker.

When Natalie was three years old, her parents moved from Israel and settled in Washington DC in the United States.

Natalie grew up in America and developed an interest in modeling when she was still a young girl. She danced and performed in local troops when she was only four years. At age 11, she had started modeling.

Natalie Portman was enrolled at the Charles E. Smith Jewish Day School in Washington DC. She later joined Solomon Schechter Day School in Glen Cove, New York. She then joined Syosset High school in Long Island where she graduated in 1999.

Natalie joined the American Theatre Dance Workshop in New York where she was trained in modern dance and ballet. Her interest in dancing, acting and modeling grew, and she again enrolled at Usdan Center for the Creative and Performing Arts in Wheatley Heights.

Natalie combined her acting with education when she started attending Harvard University. Natalie graduated in 2003 with a degree in psychology. In 2004, she did her graduate in studies at Hebrew University of Jerusalem.

Natalie Portman produced her first film in 1994 with Leon. The movie "The Professional" was a thriller film. She took her grandmother's name to protect her family. In 1995, she was cast as Lauren Gustafson in a crime film "Heat" by Michael Man. The film was a success and received numerous positive reviews.

In 1996, she appeared in "Beautiful Girls" as Marty. She also appeared in two other films "Mars Attacks" and "Everyone Says I Love You" whose director was Tim Burton. In the following year, Natalie was cast as Anne Frank in the play "The Diary of Anne Frank."

In 1999, she starred in "Star Wars Episode 1: The Phantom Menace" which was an opera film. The film was an enormous commercial success. She also starred in a comedy "Anywhere but Here" based on a book with the same title.

In 2000, Natalie took up a role as Novalee, a pregnant girl left by her boyfriend, in the film "Where the Heart Is." She appeared in the play "Seagull" as Nina.

In 2003, she appeared in a film "Cold Mountain" and played in "Oscar Needs a Change of Scenery" episode of a children's series "Sesame Street." The following year saw Natalie feature in a drama film "Garden State." She also cast as Alice Ayres in a film "Closer."

In 2005, Natalie Portman starred in "Star Wars Episode III: Revenge of the Sith." In 2006, she hosted "Saturday Night Live" and talked about "The Armenian Genocide." She also starred in a Spanish-American film "Goya's Ghosts."

In 2007, Natalie was cast in a comedy film "The Darjeeling Limited." Her vocals were also used in "The Little Big Girl" film of the animated sitcom. In 2008, she made her entrance in short film "Eve" which started at the 65th Venice International Film Festival held in Venice, Italy. The following year, Natalie appeared in the films "New York, I Love You," "The Other Woman" and the "Brothers."

In 2010, she performed in "Black Swan" an Academy Award Winning role. She also produced the film "Hesher." In 2011, she starred in "No Strings Attached," a romantic comedy film.  She cast as Isabel in "Your Highness." In 2013, Natalie appeared in "Thor, The Dark World."

Natalie Portman received the Golden Globe for "Best Performance by an Actress in a Supporting Role" for the film "Closer" in 2005.

In 2011, she was awarded Golden Globe for "Best Performance by an Actress in a Motion Picture" for "Black Aswan."

In 2011, Natalie was awarded the Academy Award for "Best Performance by an Actress in a Leading Role" for "Black Swan."

Natalie Portman has openly indicated her inclination towards the Jewish culture. She at one point said that she would raise her children in Jewish culture.

She began a relationship with a singer, Davendra Banhart, but it ended in September 2008. She started dating Benjamin Millepied the following year. There married on August 4, 2012, in an intimate Jewish ceremony in California. The couple has a son. She became pregnant with their second born in 2016.

Natalie is a vegan and does not wear clothes made of fur. She is an earnest advocate for animals' rights. She has openly shown interest in Democratic Party, supporting Democratic candidates including John Kerry, Barrack Obama, and Hillary Clinton.

Natalie Portman works with FINCA International as their Ambassador of Hope. She works by motivating women entrepreneurs by giving moral and financial support. She has been actively involved in Anti-Poverty campaigns.