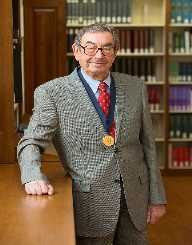 Henry Taube was born on November 30, 1915, in Saskatchewan, Canada. His parents were Albertina Telidetzski and Samuel Taube. He also had three older brothers.

As a teenager, Henry Taube attended Luther College. Once he finished at this school, he went on to enroll in the University of Saskatchewan. He stayed here until he earned a master’s degree in 1935. He then transferred to the University of California, Berkeley in 1940 with a Ph.D. in chemistry.

From 1940 to 1941, Henry Taube worked as a chemistry instructor at the University of California, Berkeley. In the fall of 1941, he began working at Cornell University as an assistant professor of chemistry. While at Cornell, Henry Taube began to focus on research. His main area of research was ions of metals and how they reacted with water and other compounds. He discovered that several ios, like ammonia and chlorine, had interesting reactions when around compounds. These reactions were called ligands.

When World War II began, Henry Taube worked on the National Defence Research Committee. This committee was responsible for researching and making new equipment to use during the war. Some of the things that this committee made/helped to make during the war were radar systems and the atomic bombs.

In 1946, Henry Taube left Cornell University and the National Defence Research Committee and began working for the University of Chicago as an assistant professor of chemistry. In later years, he would get promoted to associate professor and then to a full professor.

In 1962, Henry Taube began working at Stanford University. While here, he continued his research onions, compounds, electrons, and enzymes. He also wrote hundreds of papers while here. He continued both writing papers and researching at the University until his retirement in 2001.

Throughout his career, Henry Taube wrote many papers and even a book. Some of his most famous published works are listed below.

All of Taube’s awards were for his accomplishments in science. Some of his most prestigious awards are listed below.

Henry Taube was married to Mary Taube. Together, they had three children: Heinrich, Karl, Linda. Henry Taube also gained one step-daughter from the marriage: Marianna.