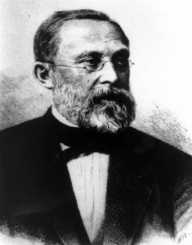 Rudolf Virchow was born in the Polish region of Schivelbein on the 13th day of October 1821.His dad was a farmer named Carl Christian Siegfried Virchow, and he was christened Rudolf Carl Virchow at birth. The family had financial challenges as their income was barely enough to take care of their daily needs. The Virchow family had a natural attraction to the wilds, and this trait was also one that Rudolf imbibed early. He became a regular crew member whenever the family went on bird-watching. Rudolf showed early signs of intellectual acumen and his parents helped to horn this by providing extra lessons for him. At the time Rudolf left elementary school, he was admitted to a school for academically-gifted students in the town of Koslin. This took him 40 miles away from home so that he could mature in his intellectual prowess.

The early coursework in high school for Rudolf Virchow comprised of lessons in Latin and Greek. His passion for picking on new languages was a strong one, and he had no issues learning French, Hebrew, Dutch and English. He left high school at the age of 17 in the year 1839. By the time he made it to medical school, he self-learned the Italian language. Eventually, it was in Berlin that he studied Medicine and Chemistry. Rudolf won a scholarship that enabled him to attend the Berlin-based Friedrich-Wilhelms University. He had an avid passion for the study of pathology.He graduated in the year 1843 and worked on short spells of medical engagements.

Rudolf Virchow became a lecturer of pathological anatomy in 1847 at the same university he attended, the University of Berlin. He battled with the thought of getting involved in theology at an early age, but as he matured, he turned away from that leaning, He considered himself too weak in voice to a preacher. Rudolf churn out papers at will. He got into a spat with publishers of medical journals in Germany, which in his opinion had become too stuck on old ideas.

He soon found a buddy in Benno Reinhardt, who was also a physician in Berlin. Like Rudolf, Benno was also at odds with the editors of the medical journals. This led to the duo publishing their journal of medicine. They christened this “Archive for Pathological Anatomy and Physiology and Clinical Medicine.” The thrust of their work was thoroughly researched medical contributions with robust ideas.

Rudolf Virchow was engaged in 1848 by the government of his day in then Prussia to investigate and research the typhus epidemic. This led him to Upper Silesia as thousands had lost their lives to the scourge in this region. Rudolf's outcomes zeroed-in on the extreme poverty of the inhabitants of the region and their unhygienic way of life.

Rudolf Virchow enthused that with the locals’ inability to retain wealth in the area; their standard of living remained poor with no improvements. Their diseased condition was spread by the effects of rotting vegetables and animal dregs.

Expanding The Boundaries Of Knowledge

Rudolf Virchow assembled his book on Cellular Pathology in the year 1858, and he put out a series of 20 lectures in this effort. The ideas originated from lectures he gave to students while teaching at the University of Berlin. This became the foundations of the medical theory that grew in modern times, incorporating pathology as well. Rudolf’s summaries were such that pointed out that a critical look at cells held the clue to all diseases. Cells were established by him to malfunction whenever diseases attack them. This cell theory was expanded to mean that every disease goes after a certain cell and that all cells are not necessarily the target of every disease. Thinkers of his day accepted this evolving light and began to see a need to research cells whenever a disease strikes so that better insight can be gleaned.

Rudolf Virchow is celebrated as the pioneer of pathological processes that lead to the unveiling of the ravages of disease on tissues and cells in the human body. His identification of the cell theory was groundbreaking for his age and time. Rudolf's worldview also led to the range of social reforms that led to the evolution of anthropology as a modern field of study. His bust of intellect and insights made him work at the time as a politician, anthropologist, medical scientist and editor of varied medical journals. His efforts are largely celebrated, but he was human and finite; he also made some judgments and scientific averments that were wrong and later disproved.

In the year 1880, Rudolf Virchow won a place in the German Parliament under the auspices of the German Progress Party. He was largely seen as a man with a caustic tongue, and his use of sarcasm was one that rattled his antagonists across the political divide. Rudolf's views were also seen as anti-Catholic as he pointed out that the ideas of his day held the society down and militated against the greater good of humanity.

He became a member of the Royal Swedish Academy of Sciences in the year 1861 as a foreigner. Rudolf bagged the Copley Medal in the year 1892.

Rudolf Virchow married in 1850, on the 24th day of August to Ferdinande Rosalie Mayer. She was the daughter of liberal politician’s daughter. Their union produced three daughters and three sons.