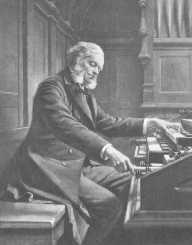 Cesar Franck was born on the 10th of December 1822 in the French region of Liège at the time. Liege, later on, became a part of Belgium later on by 1830. Nicolas-Joseph Franck was a banker, and he moved his family away from the German border area to settle his family in the interior of the Belgian country. Franck’s mother was a native of Germany. In his growing up years, Franck exhibited a grasp of drawing and musical skills which his father was pleased to observe. Franck's father encouraged him in the light of his skills and steered him to improve himself.

Cesar Franck enrolled at the Royal Conservatoire based in Liege before proceeding after his studies to France. He enrolled in the year 1835 at the Paris Conservatoire to study under the tutelage of Zimmerman to learn the Piano. He was tutored by Benoist to be an Organist. As his studies progressed, he grasped the use of the harmony from Joseph Daussoigne-Méhul and became adept in music performances.

Franck performed his first concert for King Leopold 1 of Belgium in the year 1834. He also worked with youngsters who were great at music composition such as Dukas, Dupare, and d'Indy. They produced tunes that were rich in harmony and terse in melody with a writing style that was evidently contrapuntal. Franck’s band was also addressed in French as "la Bande à Franck," The blend of Chamber and symphonic rhythm resulted as Franck worked with the fellow youngsters. Their blend of music was seen as exceeding the threshold of French conservative opera.

In a decade from his debut public performance, Cesar Franck premiered “Oratorio Ruth.” This release was done privately and performed for a select audience made up of eminent music makers of the likes of Meyerbeer and Liszt. They provided Franck with the needed feedback and constructive criticism. Franck’s aspiration to become an organist came to fruition with an opening at the Notre-Dame-de-Lorette church in 1947. This was the church he attended, and he started here as the associate organist. He made use of Cavaillé-Coll’s musical instruments and performed across France to popularize them.

When his mentor, Benoist retired from the Paris Conservatoire as Professor of Organ, Franck became a natural choice to fill the big shoes. Frank did not shy away from this as he had undergone tutelage that put him in good stead. He took up French citizenship and clinched the post on 1st of February in the year 1872. Other mentees of Franck like Louis Vierne, Ernest Chausson, and Vincent d'Indy had launched out on their careers at this time with acclaim. Franck took on the proof of success to compose his acclaimed works like the oratorio Rédemption in 1871 as well as Les Béatitudes and Oratorio Rédemption. Oratorio Rédemption was later revised in the year 1874 by Franck. Other notable works of his include the 1878 Trois Pièces for organ and the 1879 release, the Piano Quintet.

Cesar Franck's legacy was already well-shaped when his mentees got a measure of recognizable acclaim. But beyond that, he gave away his “Violin Sonata” as a wedding present to Eugène Ysaÿe, who was a Belgian violinist.
By 1888, Franck completed an opera, Giselle. He also finished the “String Quartet” within the next year and had it performed in 1890, in April. The audience loved it and received it warmly. Cesar Franck was also the titulaire of  Cavaillé-Coll, which was unveiled by his church parish to the world when Franck was already serving as the Organist.

Many people tie the success of Franck in this regard to the avant-garde experience he built up with the piano combined with his savvy organ learning. He built up his expertise by practicing on a pedal board so that he could master the thirty-note pedal and the innovative church organ. This set the stage for his remarkable success as a composer and performer that his generation could not ignore. Successive generations noted the exploits of this music legend

Cesar Franck's compositions that were suited for the organ were tallied as twelve in all. This gave him acclaim as one of the two most important organ composers in France. His other work completed in 1888 was Symphony in D minor, which along with symphonic variations for the use of the orchestra and piano, were released to audience delight. Cesar Franck's post at the Sainte-Clotilde was one that became a lifetime calling for him as he stayed on it till his death.

Cesar Franck has enduring acclaim as an extraordinary player of the keyboard. His short-lived tours as a virtuoso on the piano are not one to be forgotten either. Frank's immersion in musical studies was one that became his forte when he relocated to France and took up French citizenship.

The use of his skills in Romantic organ repertoire was one that was at its zenith which was commendable. This was equally observable with his profound organ compositions. Frank's depth of compositions was founded on biblical texts and associated church inspiration. His religious beliefs were one he kept all through his lifetime. Franck was awarded “Grand Prix d'honneur” when he successfully transposed a fugue to a third lower “on sight.”

Cesar Franck got married in the year 1848 to Eugénie-Félicité-Caroline Saillot. This 22nd of February event was a lifetime success which endured until his death. The pair met while Franck was at the Paris Conservatoire.