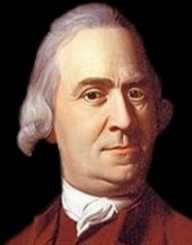 Samuel Adams is one of the forefathers of the United States.  Before the 13 colonies declared their independence, Adams was organizing the colonists to fight for their rights.

Even though Adams, Jr was an adult at the time of his parents' death, he struggled with raising his siblings.  He often worried that the British-led government would seize his family's home and property due to lawsuits.

His views on how the monarchy exercise its power over the colonists led to his political career.

Despite Adam's father's background in politics, his parents wanted him to become a minister.

Even though Samuel Adams pursued some career paths, he was fascinated by politics.  Samuel Adams and his friends published their political essays in a weekly publication called the “Independent Advertiser” in 1748. This was a place where he could call out to his fellow colonists to not let the British Empire take away their rights.  Samuel Adams argued that their Puritan values would suffer if they allowed England to oppress them.

Samuel Adams considered becoming a lawyer, but that was short-lived.  Adams worked at Thomas Cushing's counting-house but was let go because he was more preoccupied with the political climate than his work. After misusing a loan from his father, Samuel Adams went to work for his family business and became a brewer.

His next office was tax collect effective 1756.  After issues regarding the collection of taxes, his popularity with the people of Boston.  This bode well for his political career.  By then, Great Britain was dealing with their debt after the French-Indian War from 1756-1763.  The British Parliament passed

The Sugar Act of 1764. Samuel Adams declared that the colonies, though under British rule, could not be taxed because they were not represented by British Parliament. His writings presented at the Boston Town Meeting in 1764 were the first recorded document stating that Parliament could not legally tax the colonist.  This was the beginning of his fight for the rights of the colonists.

After the Stamp Act of 1765 was passed by the British Parliament, Samuel Adams called for the boycott of British goods.  His goal was that Parliament would repeal the act.  Organized groups would riot, destroying the offices and homes of British officials in Boston. Even though Samuel Adams was not directly involved in these matters, he was blamed for causing the aggression.  When the Townshend Acts were passed in 1767 calling for the tax on imported goods to the colonies, the boycott expanded to three colonies, and military assistance was requested for Boston. The tension was high, yet Adams worked as a reformer.  When the Boston Massacre occurred in 1770, he and other leaders worked with British governors to remove the troops.

Samuel Adams worked on the colonists need to declare their independence from Britain.  He did this by using his skills as a politician and working with delegates of Massachusetts. On July 4, 1776, Samuel Adams was one of the signers of the Declaration of Independence.

Samuel Adams married Elizabeth Checkley in 1749.  They had six children within seven years.  Elizabeth died in July 1757.  Two of their children grew to adulthood.  They had a son, Samuel Adams, Jr.  The son died during the American Revolution.

They also had a daughter, Hannah.  Adams then married Elizabeth Wells in 1764.  They had no children.

Some historians find his political approach controversial.  Some disagree with his use of propaganda against those who opposed his push for the rights of the colonists.

Others argue that he promoted violence and would incite mobs.  One such organized act was the Boston Tea Party.  He along with the Sons of Liberty dressed as Native Americans and dumped the cargo of tea into Boston Harbor.

Samuel Adams was born and raised a Puritan.  He attended Old South Congregational Church as an active member.  His religious values strictly imparted to him during his childhood were something he was very proud of.