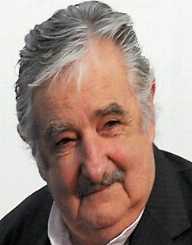 Known as world’s humblest President, José Mujica was born on 20th May 1935 in Montevideo, Uruguay. His full name was ‘José Alberto "Pepe" Mujica Cordano.’ Mujica’s father, Demetrio Mujica had a Basque ancestry and his mother Lucy Cordano was the daughter of Italian immigrants. Demetrio Mujica worked as a farmer, and in 1940, just months before his death, he went completely bankrupt. At that time, José Mujica was just five years old. His father’s untimely death left the family in deep financial crisis, and to support his family, José was forced to work as a delivery boy at a local bakery. José enjoyed cycling, and from the age of 13 to 17, he took part in many cycling races for several clubs.

Right from teenage years, José Mujica was actively involved with the National Party. In the year 1966, he joined the newly-formed MLN-Tupamaros movement, an armed revolutionary group which was inspired by the Cuban Revolution. Three years later, in an attempt to conquer the city of Pando, he led a squad of MLN guerillas.

In 1970, José Mujica was shot six times by the police at a Montevideo bar while trying to resist arrest. Death was inevitable, but Mujica made a miraculous recovery. He was again arrested the following year but managed to escape soon. Mujica, along with 100 other Tupamaros, escaped from the Punta Carretas prison by digging a tunnel. Within a month of escaping, Mujica was again captured and put behind bars. He fled the prison again only to be re-apprehended once more in 1972. After his arrest in 1972, he spent 13 years in prison which was a den of iniquity. During this time, Mujica had to face numerous atrocities and even spent two years at the bottom of a well. He suffered from mental agonies and spent a lot of time in solitary confinement.

In 1985, along with thousands of other prisoners, José Mujica was released from prison under an amnesty law. The Tupamaros then joined other left-wing organizations, and this led to the formation of the political party ‘Movement of Popular Participation.’ The organization formed in the year 1989 soon found acceptance within the Broad Front coalition.

José Mujica with his charismatic personality rose through the ranks and was elected as the Deputy in the 1994 general elections. In 1999, he was appointed as the senator. By this time, the MPP political party had become the top political force in the country, and the victory of Presidential candidate Tabaré Vázquez stands as testimony to this. In the year 2005, José Mujica was designated as the Minister of Livestock, Agriculture, and Fisheries by President Tabaré Vázquez. He resigned from the position of the Senate to accept this cabinet position. He continued to serve as the Minister till a cabinet change in the year 2008.

In 2008, the ‘Broad Front’ elected Mujica as their Presidential candidate. After defeating former president Luis Lacalle Herrera and winning the election in 2009, Mujica was sworn in as the President of Uruguay on March 1, 2010.

During his tenure as the President, José Mujica's political ideologies transformed from being orthodox to pragmatist. He was very popular amongst the masses due to his kind and soft-spoken behaviour. He was a President known to speak the language of the people. Immediately after being elected the President, he resolved the long-standing Uruguay River pulp mill dispute between Argentina and Uruguay. A conciliatory approach towards the Argentinian government and his good interpersonal relations with Argentinian counterpart Cristina Kirchner proved to be critical factors in the settling of the dispute.

José Mujica was constitutionally prohibited from running for a second term of Presidency, but his immense popularity helped Tabaré Vázquez regain the seat of the President in the 2014 elections. José Mujica’s presidential term came to an end on March 1, 2015.

In 2012, President Mujica was nominated for the Nobel Peace Prize.

José Mujica, nicknamed ‘El Pepe’, is a self-described atheist. After many years of staying in a live-in relationship, he married Lucía Topolansky in the year 2005. They have no children and live with their three-legged dog Manuela in a humble farm on the outskirts of Montevideo. The couple cultivates chrysanthemums in their farm. The most modest President of the world refused to stay in the presidential palace or use the services of its staff. He donates 90% of his salary to the needy and leads a simple lifestyle.

Acclaimed Serbian film director Emir Kusturica is working on a documentary film showcasing the life of Mujica, whom the director considers as the ‘the last hero of politics.’