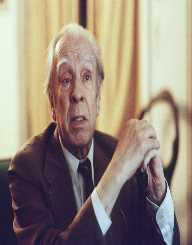 Born August 24th, 1899 in Buenos Aires, Argentina, Jorge Franciso Isidoro Luis Borges Acevedo was a coveted writer, famed for his short stories, essays, poetry and for his work as a translator. During his writing career, he produced many 20th century classics such as Ficciones (1944) and El Aleph (1949) which contributed to rendering him a lead icon in Latin American literature. Jorge spent his time reimagining theories on reality and fighting for political change, especially during the times of the Falkland War. Despite becoming a hugely influential writer, he infamously did not receive the highly regarded Noble Prize, making him one of the most critically acclaimed writers never to have received the honor.

Jorge Luis Borges was born into an educated middle-class family, growing up in the poverty stricken suburb of Palermo. His father, Jorge Guillermo Borges Haslam was a lawyer, psychology teacher and the obvious source for Jorge's literary passion due his love for literature. He also grew up with his mother, Leonor Acevedo Suárez and his younger sister, Norah. Bright from a young age, at only nine years old, Jorge translated Oscar Wilde's 'The Happy Prince' to Spanish, a story that had been published in a local journal. Home-schooled until the age of 11, Jorge had already learned to speak both English and Spanish before the family migrated to Geneva, Switzerland, in 1914 due to his father's ever failing eyesight which forced him to retire from law. While in Geneva, Jorge attended school for the first time and became fluent in French.

During his time in Europe, he was introduced to a vast range of literacy icons such as Scottish writer, Thomas Carlyle and, at the age of 18, he was introduced to Maurice Abramowicz, another source of inspiration. In 1918, Borges graduated high school and received his baccalauréat, a French academic qualification. Due to the civil unrest occurring in Argentina, the family decided to stay in Europe and lived in various cities across Spain including Barcelona, Madrid, Seville, and Majorca. During this period in Jorge's life, he was further introduced to the works of Gustav Meyrink and Arthur Schopenhauer, individuals that would later go on to inspire Jorge's work. Whilst in Spain, he also became part of an anti-Modernist Ultraist literary movement. One of his first publications, Hymn to the Sea, was published in the magazine Grecia.

By 1921, Borges and his family had returned to Buenos Aires with his new found passion for Ultraism. He expanded massively on his career as a writer, publishing his first official collection of poetry, Fervor de Buenos Aires in 1923. He then went on to become one of the founding members of the Journal Prisma, a broadsheet publication that was distributed by pasting copies on the street walls. During the mid-1930s, Borges became a frequent writer for Sur, a magazine at the time that was regarded as one of the leading authorities in literary, awarded Borges with popularity and recognition.

In 1933, Borges was employed by the newspaper Critica into an editorial position in which he published his own work, which were later collected into a book. From the years 1936 to 1939, he wrote weekly columns and articles for El Hogar. In 1938, Borges was hired as a first assistant at the Buenos Aires Municipal Library. Since the library was located in the working-class region of the city, less than 100 books had to be processed a day, leaving Borges the majority of his days to write articles, essays and short stories in the libraries basement.

After the sudden death of his father in the same year, Borges went on to write Pierre Menard, Author of The Quixote, which was published in May 1939, a book that analysed father-son relationships. As time went on, Borges passion for writing began to decrease which resulted in him becoming a public lecturer, a career that allowed him to gain further publicity and became the coveted President of the Argentine Society of Writers as well as other appointments including Professor of English and American Literature. In 1954, Borges' short story Emma Zunz was produced into a film by Argentine director, Leopoldo Torre Nilsson. During this period, Borges also experimented writing screenplays.

Borges married Elsa Astete Millán, the widow of a close friend, in 1967. It is rumored the marriage occurred because his mother was ageing and became unable to care for her blind son. The marriage ended after three years, and after the proceedings had concluded, Borges returned to the care of his mother. In 1986, months before his death, Borges married Maria Kodama, his assistant at the time.

Borges passed away on June 14th, 1986 due to liver cancer. He was back living in Geneva at the time and was taken to the Cimetière des Rois.

As a writer, Borges' work was heavily influenced by political movements during his lifetime and was an active individual when it came to speaking out. During a conference at the Columbia University in 1971, Borges was quoted saying that he was Conservative, with views against Communism, Nazi regimes, and anti-Semites movements but clearly expressed these personal views were kept out of his written work.

In the late 1960s, Borges was interviewed by Richard Burgin in which he stated: “...that individuals should be strong and the State should be weak”. After the coup overthrow in Argentina in 1955, Borges expressed complete outrage that the Communist Party of Argentina opposed the ongoing attempt to rid the Government of Peronists and break up the former welfare state. He expressed these opinions openly in journal columns and during his lectures.

There is also a vast amount of information regarded Borges as Anti-Fascist, Anti-Peronist and a large range of articles expressing his support of Argentina's military junta, opinions that were later scandalized.

On Christmas Eve, 1938, Borges was subject to a serious accident which resulted in him suffering from an almost fatal head wound, in which he almost died from infection. During this time, Borges experienced with various new writing styles which resulted in the formation of Pierre Menard, Author of The Quixote. By the late 1950's, Borges had also become completely blind.

Borges is renowned as one of the most influenced and greatest writers in Latin America history. From early on in his writing career, he released the still ever popular collections such as Ficciones (1944) and El Aleph (1949). Many of these stories were later collected and later released again in Labyrinths (1962), a selection of 23 short stories that is still an extremely popular purchase today.

Another notable releases include The Library of Babel, a short story in which a universe takes the form of a library, a perfect example of Borges writing style and unique insight into the way he perceived reality.

Towards the end of his inspirational life, Borges' work gained a huge amount of popularity and appreciation, resulting in him being awarded a variety of awards and prizes.