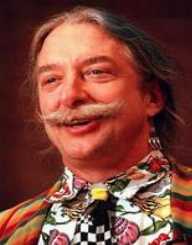 American physician, activist and author Patch Adams was born on the 28 May 1945 in Washington, D.C. His parents were Anna Hunter and Robert Loughridge Adams. His father was a Korean War veteran who died while stationed with the US Army in Germany. Adams returned to America after the death of his father, depressed and suicidal. One of his close friends was murdered in the 1960s, and this tragedy had a strong impact on his thinking.

Patch Adams was a pupil at Wakefield High School, graduating in 1963. He then enrolled at George Washington University and obtained an M.D. from Virginia Commonwealth University in 1971.

Patch Adams founded the Gesundheit! Institute in 1971. The organization works with volunteers worldwide to bring uplifting humor and positivity to orphans, patients and others in need.

A film based on his life and philosophy, Patch Adams, was released in 1998. Robin Williams portrayed Adams in the film. The Robin William's film inspired the 2003 Bollywood film Munna Bhai MBBS.

Patch Adams married Linda Edquist in 1975, and the couple had two sons: Atomic Zagnut and Lars Zig Edquist. The couple divorced in 1998. He married Susan Parenti in 2010.