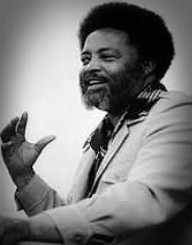 One of the principal leaders of the civil rights movement in the United States and an aide of Martin Luther King, Jr. Hosea Williams was born on the 5 January 1926 in Decatur County, Georgia. His young teenage parents were both blind and residents of a trade institute for the blind in Macon at the time he was conceived. Upon discovering her condition, his young, pregnant mother ran away from the institute. William’s mother died giving birth to her second child, and he was raised by his maternal grandparents, Turner and Lele Williams. He never discovered who his biological father was.

Williams left home in his early teens and did various unskilled jobs before joining the US Army during WWII. He served with distinction in General Patton’s African-American unit. Wounded in battle, he spent eighteen months in a hospital and was awarded the Purple Heart. His war injury left him with a permanent limp.

After WWII Williams returned home to Georgia. He then obtained his high school diploma as a mature age student of 23. Later, with the assistance via the G.I. Bill, he enrolled at Morris Brown College in Atlanta and graduated with a degree in chemistry. He furthered his education by doing a master’s degree at Atlanta University.

Once his studies were completed, Williams took up a position as a chemist with the U.S. Department of Agriculture in Savannah, Georgia. He became the U.S. Department of Agriculture’s first department’s first African-American research scientist. Williams went on to found the Southeast Chemical Manufacturing and Distributing Company which developed and sold cleaning supplies.

As a young man, Williams was threatened with lynching by a white girl. Later in the 1950s and early 1960s he encountered a lot of racism. For instance, being beaten up for drinking from a drinking fountain at a bus station in Americus. The attack resulted in Williams spending five weeks in the hospital. He had also had issues in his workplace, the Department of Agriculture, over his outspoken attitude towards institutionalized racism inherent in government institutions at the time. Because of this and also because he realized that his children were being exposed to racism, Williams joined his local branch of the National Association for the Advancement of Colored People and eventually became Vice-President. Later, after his application to join the national board of directors of the NAACP was rejected Williams resigned from the organization.

Some of the movement’s early victories were that Savannah became the first city in Georgia to desegregate lunch counters. Williams was arrested and jailed for 65 days. When riots followed, and buildings were burnt down in Savannah, a committee of a hundred concerned citizens petitioned for his release and committed to the further desegregation of their city.

Martin Luther King, Jr. encouraged Williams to join the SCLC, (the Southern Christian Leadership Conference) and he did so. In March 1965 Williams was one of the leaders of the Student Nonviolent Coordinating Committee which led a march from Selma, Alabama to the state capital of Montgomery. The idea was to have a peaceful march to deliver a petition to the Alabama governor about African American voting rights. When demonstration took place on the 7 March 1965 violence broke out, and the event became known as Bloody Sunday. Many of the marchers were clubbed, whipped or tear-gassed.

U.S. President Lyndon Johnson watched the coverage of the 7 March riot and as a result forced the Voting Rights Act through in August 1965.

In April 1968 when Martin Luther King Jr. was assassinated in Memphis, Tennessee, Williams was at his side

In 1987 Williams led two Marches to protest against and confront the Ku Klux Klan. The first was in Forsyth County. Known as the Brotherhood March, it took place on the 17 January. The march clashed with around 400 Ku Klux Klan members with rocks and bottles thrown around. A week later Williams along with Jesse Jackson, Atlanta mayor Andrew Young and Colorado Senator Gary Hart led another march. They produced a list of demands which included the return of confiscated property, employment rights, and a biracial council. A class action was filed against the Klan by Williams, and a jury awarded the marchers $950,000.

Hosea Williams ran for the George House of Representatives in 1968 but was unsuccessful. In 1970, he ran as a Republican Party member for Secretary of State but did not win that either. He tried again in 1972, running for the US Senate as a Democrat but lost that as well as the Atlanta mayoral primary in 1973. Determined to have a say in politics, Williams ran as a Democrat and was elected to the state senate in 1974. He served that role for eleven years before running for the US Senate which he lost. Williams then won a seat on the Atlanta City Council and served for five years before losing the mayoral race to Maynard Jackson. Williams was later elected to DeKalb County Commission where he remained until 1994. In the meantime, his wife Juanita Williams was elected to the Georgia Legislature where she served four terms.

Williams died on November 16, 2000. In a statement at the time of Williams’s death, President Bill Clinton issued a statement acknowledging his courage as both a soldier in World War II and his involvement in the Voting Rights Act. Clinton went on to say that one of the highest honors of his Presidency was walking across the Edmund Pettus Bridge with Williams on the 35th anniversary of the Selma march in 2000.

Hosea Williams was a Baptist.