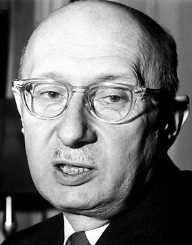 Edward Lawrie Tatum was born on December 14, 1909. He was an American biochemist. In 1958, he won the Nobel Prize in Medicine. He won the prize by showing that genes control individual steps in metabolism. He was also a professor and lecturer in various institutions during his lifetime. He became interested in science when he was still young, and he was significantly motivated by his father who drove him towards a career in chemistry. He died on November 5, 1975, at the age of sixty five.

Edward Lawrie Tatum was born on December 14, 1909, at Boulder, Colorado. He was born to Arthur Lawrie Tatum who was an instructor in chemistry at the University of Colorado and Mabel Webb Tatum. His father later became a professor of Pharmacology. His mother died while he was still a young child. He was brought up alongside two siblings, Howard Tatum and Besse Tatum. His family used to move from place to place as his father held various teaching positions in different universities across the United States.

In 1935, Edward Lawrie Tatum went to Holland for his post-doctoral work receiving a General Education Fellowship at the University of Utrecht. At the university, he worked on the identification of growth factors in staphylococci, but he was not successful. He later returned to the University of Wisconsin where he stayed until 1937. In 1937, he joined Professor George Beadles at the Department of Biological Sciences at the University of Stanford as a research associate without any teaching responsibilities. He joined Professor George to work on Drosophila. He extracted the V+ hormone from the Drosophila, but he received no credit as Adolf Butenand preceded him in the discovery.

Edward Lawrie Tatum and Beadle, therefore, shifted their focus to Neurospora crassa.  By the year 1941, they had extracted mutants from the Neurospora Crassa which were deficient in nutrition, and they were ready to submit their first report. In the report, they concluded that the gene and enzyme specificities are of the same order. In the same year, they established a link between gene and enzymes which led to the development of ‘one gene-one enzyme’ hypothesis. Later that year Edward was promoted to assistant professor. He taught biochemistry to both biology and chemistry students. He later became the professor of Microbiology in the same institution.

In 1946, Edward Lawrie Tatum started working with Joshua Lederberg on Bacteria. In 1948, he returned to the University of Stanford as a professor in the Department of Biology. In 1956, he was appointed the head of the Department of Biochemistry. Towards the end of the year, he left the University of Stanford to join Rockefeller Institute. He served as the Chairman of the Board at the Cold Spring Harbor Biological Laboratory.

In 1958, Edward Lawrie Tatum together with George Wells Beadle received the Nobel Prize for Physiology or Medicine for their discovery that genes act by regulating definite chemical events. The prize was also co-shared by Joshua Lederberg.