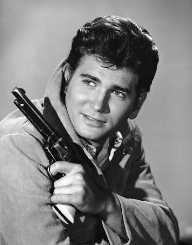 American actor Michael Landon was born Eugene Maurice Orowitz on the 31 October 1936 in Queens, New York. Both his parents were in the entertainment business. His mother Peggy O’Neill was an actress, and his father Eli Maurice Orowitz was a film theatre manager as well as an actor. Landon was raised in Collingswood, New Jersey.

He was a Grade A student in his early schooling years but later when he focused on sport, his grades slipped. His athleticism won him a scholarship to the University of Southern California.

After deciding to become an actor, he changed his name to Michael Landon. Early appearances included an episode of the television show Telephone Time: The Mystery of Casper House; a role in the film I Was A Teenage Werewolf (1957) and High School Confidential. Other television appearances included roles in Crossroads, Sheriff of Cochise, Fight For The Title and State Troopers.

A breakthrough role came when Landon was given the role of Little Joe Cartwright in the NBC television Western series Bonanza (1959-1973) which made him a household name. The show was the first television series to be broadcast in color and Landon remained with the show until its cancellation in 1973. Landon’s next major television role after Bonanza was in another NBC production, Little House on the Prairie. The show was an adaption of Laura Ingalls Wilder’s book published in 1935 and Landon served as executive producer, director, and writer. The award-winning series ran until 1983. Landon then produced the television series Father Murphy, starred, produced and directed the series Highway to Heaven (1984-1989),  produced the film Sam’s Son (1984)  and starred in the telemovie Love is Forever (1983). His television adaption of the novel Where Pigeons Go to Die won two Emmy nominations. His final work was starring in a pilot for CBS entitled Us (1991).

Apart from acting, Michael Landon released a single Gimme A Little Kiss (1957). And in 1964, his single Linda is Lonesome came out.

Landon was awarded a star on the Hollywood Walk of Fame in 1998. He was also inducted posthumously into the National Cowboy & Western Heritage Museum. During his lifetime he was the recipient of many nominations and awards including a Western Writers of American Best TV Script Award for Little House on the Prairie: May We Make Them Proud (1981) and a 1979 Golden Globe Award nomination for Best TB Actor for Little House on the Prairie.

Michael Landon died of pancreatic cancer on the 1 July 1991 in Malibu, California at the age of 54.