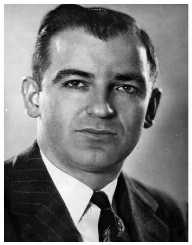 Joseph McCarthy was an American politician, attorney, and military major.

Joseph Raymond McCarthy was born in the town of Grand Chute, Wisconsin, on November 14, 1908. His parents’ names were Timothy and Bridget. He had six siblings. At the age of 14, he dropped out of school and he started working on his parents’ farm. He enrolled at Little Wolf High School at the age of 20 and he managed to graduate within a year. In 1930, he enrolled at Marquette University in Milwaukee. He spent the first two years studying electrical engineering. After that, he switched over to law and he received his degree in 1935.

In 1935, McCarthy passed the bar exam and started working at a law firm in Shawano. In 1939, he was elected as a circuit judge for the 10th District. In 1942, he served in World War II as a first lieutenant for the U. S. Marine Corps. He soon earned the title of captain and he served until 1945. After the war, he stayed in the Marine Corps Reserve and he earned the rank of major.

McCarthy was elected to the U. S. Senate in 1947, as a member of the Republican Party. His first three years as a Senator were relatively normal. In 1950, he gave a speech at a Republican Club in Wheeling, West Virginia. During the speech, he accused many members of the State Department of being undercover communists. This became widely known and received a lot of media coverage. The Senate decided to investigate his accusations. Soon after, the Tydings Committee was formed. Ultimately, the Committee reached the conclusion that none of the people on the list was tied to communism.

McCarthy continued to accuse other government officials of being communists, spies, or traitors. He received support from the Catholic Church and from the members of the Kennedy family. He clashed with the administrations of Presidents Truman and Eisenhower. He also started an investigation against a section of the U. S. Army. His methods were quite cruel. He viciously attacked his opponents and he destroyed their reputations without a valid reason. The term ‘McCarthyism’ was created as a synonym for defamation. In 1954, the Senate voted to censure him as a punishment for his actions. The other Senators started to avoid him and they ignored his speeches and prepositions.

McCarthy was rumored to be gay, although without any proof. In 1953, he married one of his staff members, a woman named Jean Fraser Kerr. Four years later, they adopted a baby girl and they named her Tierney Elizabeth McCarthy.

After his censure, McCarthy became an alcoholic and a heroin addict. He passed away on May 2, 1957, in the Bethesda Naval Hospital in Maryland. He was 48 years old. A mass was held for him at St. Matthew’s Cathedral in Washington D. C. His body was buried at St. Mary’s Parish Cemetery in Wisconsin. Thousands of people attended his funeral, including many prominent politicians.