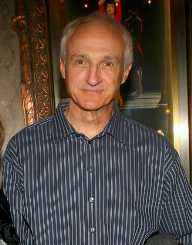 Michael Gross was born 21st June 1947, to William and Virginia Gross. He was born in Chicago, Illinois, in the United States. He has a younger sister, Mary, who also went into the entertainment industry. His father was a tool designer, his mother, a telephone operator.

Michael Gross studied at Kelvyn Park High School in Chicago. He then went to the University of Illinois where he graduated with his degree in drama. Gross then did his master’s degree in fine arts at Yale University.

Michael Gross was in his first television movie in 1975, called A Girl Named Sooner. He would be best known though, for his portrayal of Steven Keaton in Family Ties, a television sitcom which ran from 1982 to 1989.

Michael Gross married Elza Bergeron in 1984. Bergeron is a casting director. She had two children from a previous relationship, and Michael Gross has become their step-father.

Michael Gross has a keen interest in model railways, and he is the spokesman for the World’s Greatest Hobby campaign, which is sponsored by the Model Railroad Industry Association.

He is a member of the Santa Fe Railway Historical Society.