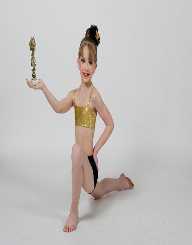 Sarah Hunt was born on May 15, 2005. Her parents are Christy and George Hunt. She also has three little brothers named Isaiah, Jeremiah, and Zachariah.

Since Sarah Hunt was five years old, she knew she wanted to dance. Even at that young age, she was performing for her parents and getting their help to upload her videos to YouTube.

Sarah Hunt is famous for her spot in the Abby Lee Dance Company. Abby Lee, the owner of the company, teaches young girls how to dance. This company gained popularity when it got its show on The Lifetime Network with the name Dance Moms. The show features about a dozen girls at a time who compete to get the main spotlight in their dance competitions. Another spotlight of the show is the way the mothers act towards the dancing daughters.

Many of them are overprotective and expect nothing but perfection from their daughters. Even Sarah’s mother is known to add drama to the show by arguing with her daughter and other mothers while the camera is rolling. Sarah Hunt first appeared on the show in the fourth season of the episode Lights! Camera! Dance! From there on, she and her mother Christy became regulars on the show.

While on Dance Moms, Sarah proved that she was not only a talented dancer, but that she was also loyal to her friends and her practice, determined to be the best that she could be and that she was willing to put in all the work that she needed to get a dance right, even when it proved difficult to herself and the other dancers on the show. It has also been said that she spent 20 hours a week dancing, trying to perfect her moves.

No matter how much pressure was put on this young girl, Sarah always came out shining. She avoided getting into drama and instead focused on her dancing and her friends. Her talent shown in the series sets the stage for her to learn much more as she grows up. A promising dance career seems to be in her future.

In 2014, Sarah Hunt earned the spot of Clara, in a production of the famous Christmas-themed ballet, The Nutcracker at the Madison Theatre. In the same year, she danced a solo, which won the junior category at the Hollywood Vibe event.

Sarah Hunt was also in a music video for a song called Puppy for Christmas by Gina Naomi Baez.

Since Dance Moms, Sarah Hunt has continued using a YouTube channel to show her dance moves. Since she is famous among young girls around the country, she also posts videos of herself answering questions from fans, spending time with her friends (both from Dance Moms and from other areas of her life) and siblings, and just having a good time being a kid.

Sarah Hunt also has her own Instagram page where she posts pictures of herself and her friends. She posts many images from her dance classes, photos with her friends, and other silly things that young kids do. On her page, she also talks about her love for God and Jesus, showing her family’s Christian values.