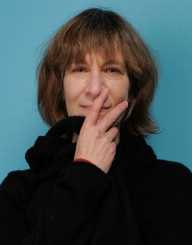 Amanda Plummer is an American actress who received various awards for her acting skills. Throughout her career, she is well-known to take on the role of individuals with mental illnesses or damaged women struggling to get by life.

Plummer did not marry nor have any children but dated director Paul Chart from 1994 until 1997.

She was born as Amanda Michael Plummer on March 23, 1957, in New York City. Acting has always been in her lineage since she was the only daughter of Canadian actor Christopher Plummer and American actress Tammy Grimes.

Her parents divorced when she was only 4 years old and the young Plummer took to her mother who was constantly on the road for various acting jobs. At times, she lived with her grandparents in Massachusetts while her mother constantly jumped from one job to another.

Plummer attended United Nations International High School and upon graduation studied acting for two and a half years in Vermont at Middlebury College.

Upon graduating from Middlebury, she continued to enhance her skills at the trade by studying at Neighborhood Playhouse School of the Theatre in New York. She made her acting debut at the Manhattan Theater Club by appearing in the 1979 comedy-drama Artichoke. The same year, she also appeared in A Month in the Country alongside her mother.

Her stage acting caught the attention of director Lamont Johnson. Impressed, he cast Plummer in the 1981 film Cattle Annie and Little Britches. The same year, Plummer made her Broadway debut in the 1981 revival of A Taste of Honey.

Due to her superb acting skills, a long line of film roles followed suit. In 1983, she was cast in The World According to Garp and Daniel followed by her participation in the film The Hotel New Hampshire in 1984

Throughout her acting career, Plummer received various nominations and awards.

For her role as Honey Bunny in Quentin Tarantino’s Pulp Fiction, she was nominated for an American Comedy Nomination. While starring alongside Robin Williams in Fisher King, she was nominated for a BAFTA Award. In 1982, Plummer garnered multiple awards for portraying the role of an accused nun named Agnes in Agnes of God wherein she was the recipient of the Tony Award for Featured Actress.

She also received an Emmy Award in 1996 for her acting in the episode of the television series, The Outer Limits. Another TV appearance that won her another Emmy Award is from when she portrayed a schizophrenic woman.

Plummer took a low profile in show business until she re-emerged was cast as in the second installment of the Suzanne Collins’ Hunger Games’ trilogy Catching Fire. In the film adaptation, she took on the role of Wiress, an eccentric old woman who was a former tribute from the past Hunger Games.