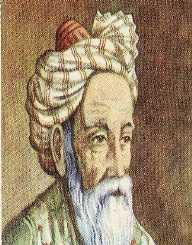 Omar Khayyam was born on May 18, 1048, in the trading city of Nishapur in northern Persia. There is some dispute amongst scholars as to his father’s occupation. Some believe that he was a physician, others a tentmaker.

Omar Khayyam was educated by tutors including Bahmanyar bin Marzban and Khawjah al-Anbari. Marzban was a mathematician who followed Zoroastrianism. He, in turn, had been tutored by one of the major philosophers and scientists of the day, Avicenna. Al-Anbari instructed Khayyam in the science of astronomy.

Recognized by scholars as one of the great, pioneering mathematicians, Omar Khayyam made his mark with his contributions to geometry and algebra. He documented the length of the year in 1072. He is also well known today for his poetry.

The Rubaiyat of Omar Khayyam was translated into English by Edward Fitzgerald and published in 1859. Many of its brilliance has acknowledged this famous poem. TS Eliot and Arthur Conan Doyle were both admirers of Khayyam.

In 1869, The Rubaiyat was published in the United States. Walt Whitman, the famous American poet, joined the British literati in acknowledging Khayyam’s contribution to literature.

Following the death of his father, Omar Khayyam went on a three-month journey to the city of Samarkand, today part of Uzbekistan. Omar arrived there as a young man of twenty in approximately 1068. The town was a place of great learning at the time. The Governor and Chief Judge was Abu Tahir, a family friend. Tahir was quick to notice Khayyam’s mathematical ability and employed him. Khayyam then worked in the Treasury, continuing his research into algebra.

Omar Khayyam published Treatise on Demonstration of Problems of Algebra and Balancing in 1070 AD. Thereby proving that is was possible for a cubic equation to have more than one solution. He was following in the steps of Archimedes when he dealt with the problem of finding the ratio of the volume of one part of a sphere to another. Referencing Euclid’s Elements, he showed that algebra and geometry were linked. At age 22, Omar Khayyam was considered a first-class mathematician and his reputation was secure.

Omar Khayyam then moved to Isfahan in 1073 at the invitation of the Sultan of the Great Seljuq Empire Malik Shah and Nizam al-Mulk, his vazir. He was able to choose a team of scientists, was highly paid and had access to the most influential people. It was during this time that he worked on measuring the length of a year. The calendar he produced in 1079 was used until the 20th century.

In recognition of his contributions towards astronomy, a lunar crater is named after Omar Khayyam.

There is not much data available concerning Omar Khayyam’s own life.

After his mentor and vazir both had died, Omar Khayyam went into seclusion. He did not teach again.

Omar Khayyam’s contribution to mathematics and poetry has stood the test of time.