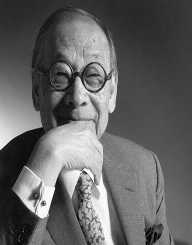 I.P. Pei born Ieoh Ming Pei is a Chinese American architect best known for the design of National Centre for Atmospheric Research, Colorado, which designed in 1961 and completed in 1967. Born on April 26, 1917, I.M. Pei was recruited by Willaim Zeckendorf,  to start a career at Webb and Knapp, a New York City real estate magnate in 1948. After spending seven years there, I.M. Pei established his own design firm I. M. Pei & Associates in 1955. In 1966, the company was renamed I. M. Pei & Partners and once again changed the name to become Pei Cobb Freed & Partners in 1989. , I.M. Pei worked on several edifices including the John F. Kennedy Library in Massachusetts, Dallas City Hall as well as the East Building of the National Gallery of Art.

His architectural works in China include a Hotel at Fragrant Hills and the Bank of China Tower, Hong Kong. A glass-and-steel pyramid for the Musee du Louvre in Paris is one of his works as well as others like the Miho Museum, Japan, Morton H. Mayerson Symphony Centre, Dallas, the Museum of Islamic Art, Qatar and the Suzhou Museum in Suzhou. , I.M. Pei retired from full-time service in 1990 and has since become an architectural consultant for Pei Partnership Architects owned by his son.

I.M. Pei was born on April 26, 1917, in Suzhou to Tsuyee Pei and Lien Kwun. He had five other siblings. At age one, the family moved to Hong Kong. As a child, I.M. Pei was more attracted to the world of music and other culture, despite his father’s career in banking. Pei is noted to have said, "I have cultivated myself," due to his own efforts in exploring arts. When Pie was ten, the family moved to Shanghai as his father gained promotion. I.M. Pei was educated at Saint John’s Middle School, run by Protestant missionaries under very strict rules and he had only half a day in a month for leisure.

I.M. Pei learned the English language through reading the Bible and novels by Charles Dickens. His mother developed cancer and died when I.M. Pei was thirteen years. After his secondary school education, I.M. Pei enrolled at the University of Pennsylvania in 1935, which to him stood out in terms of the study of architecture. I.M. Pei also chose United States, particularly because of Hollywood and his love for Bing Crosby movies and the fact that he believed college life in the US was a fan as compared to China as portrayed in films.

I.M. Pei, however, got disappointed upon reaching the University due to the style of teaching, which was based on the Beaux-Art style in the classical traditions of Greece and Rome. I.M. Pei who was more in love with modern architecture then decided to quit architecture and study engineering at the Massachusetts Institute of Technology (MIT) that same year. While there, the dean of the school convinced him to continue pursuing architecture as he saw his love for designs. MIT also used the same Beaux-Arts style to his disappointment.

I.M. Pei, however, found solace in the library after chancing on a book by Swish-French architect, Le Corbusier, which contained new designs of International style and mostly characterized by the use of glass and steel materials in a more simplified form. I.M. Pei interest in architecture arose again Corbusier visited MIT in 1935, and that would have a lasting impact on him. During this time I.M. Pei also fancied the works of US architect Frank Lloyd Wright and even visited his famous Taliesin building in Spring Green, Wisconsin in 1938. In 1940, Pie graduated with a B.Arch degree.

After his education, I.M. Pei preferred to return to China but the Second Sino-Japanese War was going on and was advised by his father to remain in the United States. I.M. Pei then joined the Stone & Webster, a Boston engineering firm where he worked for two years. I.M. Pei joined the Graduate School of Design at Harvard in 1942 but soon had to quit by joining the National Defence Research Committee, which during the Second World War did scientific research into US weapon technology. His background in architecture made him an asset for the Committee. While there, I.M. Pei was tasked to work on an incendiary bomb for the Pacific War as the US saw buildings in Japan were different from that of Europe made of stones. This meant that bombs used in Europe wouldn’t be effective in Japan whose buildings were made of woods and papers.

In 1945, I.M. Pei returned to Harvard as an assistant professor of design. While there, I.M. Pei worked with Walter Gropius and Marcel Breuer who were more into modern architecture. He received M.Arch from the Graduate School of Design in 1946, and the next two-year still held his post at Harvard.

I.M. Pei commenced his architectural career by joining Webb and Knapp after being recruited by New York real estate magnate William Zeckadorf’s. His first job for the firm was the design for an apartment building funded by the Housing Act of 1949. His design based on the circular tower with concentric rings with other features was seen as costly, and therefore the building remained at its model stage. That same year, I.M. Pei designed a two-story corporate building for Gulf Oil in Atlanta, Georgia, which was executed. The design received praise from the Journal of Architectural Forum and brought about several other projects. With the flooding of new projects, I.M. Pei asked for assistants from Zeckendorf who selected Henry N. Cobb and Ulrich Franzen to assist him. The team then worked on the Roosevelt Field Shopping Mall and gave the Webb and Knapp building a face-lift.

I.M. Pei and his team then embarked on some projects in Denver, Colorado with the first being the Mile High Centre in 1952, the 16th Street Mall in 1982 among several other projects. I.M. Pei then thought of being independent and in 1955 established the firm I.M. Pei & Associates, which later became I. M. Pei & Partners. Nonetheless, I.M. Pei still worked with Zeckendorf. I.M. Pei set up the Kips Bay Towers which he was deeply involved even at the construction stage.

Other projects he undertook includes the Society Hill project in Philadelphia, by designing the Society Hill Towers, The National Centre for Atmospheric Research building, John F. Kennedy Library, which I.M. Pei terms as his most important commission and that, boosted his architectural reputation. Others include the Dallas City Hall, the Hancock Tower in Boston, which became the tallest building in New England upon its completion in 1976. Pie and his associates designed several other world-class edifices including the National Gallery East Building in Washington DC, the hotel in Fragrant Hills, China, Javits Convention Centre, New York, Le Grand Louvre, Paris, Bank of China Hong Kong, Rock and Rolls Hall of Fame,

I.M. Pei was married to Eileen Loo and the two married for over seventy years. They had four children, three sons, Ting Chung, Chien Chung and Li Chung and a daughter Liane. Eileen Loo died in June 2014.

I.M. Pei received several awards including the National Institute of Arts and Letter’s Arnold Brunner Award, AIA Gold Medal, the first Praemium Imperiale for Architecture from Japan Art Association, Edward MacDowell Medal in the Arts and the Pritzker Prize which was accompanied with US$100,000 award. He also won the Henry C. Turner Prize from the National Building Museum board and received the Presidential Medal of Freedom from President George W. Bush.