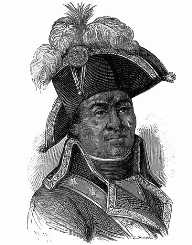 Toussaint Louverture, an erstwhile black slave, is regarded as the leader of the only successful slave revolution in modern history. He successfully led the Haitian Independence Movement during the era of the French revolution and established an Independent State under his governance for a short period.

Toussaint Louverture was born on 20 May 1743 in Saint-Domingue (present-day Haiti). His father is believed to be Gaou Guinou, a younger son of the King of Allada. He was the eldest of the several children of Gaou Guinou and his second wife, Pauline. He was born as a slave child, but his father was once a free man. Allada (also spelled as Arrada) was a West African ancient kingdom located in modern-day Benin. His father, Gaou Guinou was captured in a war and sold into slavery.

Toussaint Louverture was lucky to have a generous master as a slave. His master allowed him to study. His penchant for reading intensified with his foray into the writings of the French enlightenment philosophers. With the passage of time, he became an avid reader and started to read whatever reading material he could manage to collect.

At the age of 20, Toussaint Louverture was able to speak three different languages, French, Latin, and Creole. He also gathered knowledge about medicinal plants and herbs around the same time.

It is generally believed that his extremely generous master allowed him to study to such an extent that Toussaint Louverture was able to become a well-educated person in life. His medical knowledge is believed to have been acquired from his perceived education from the Jesuit Missionaries. His understanding and application in this regard were quite familiar with African herbal medical techniques and also similar to the commonly used methods in Jesuit administered hospitals. There is a dispute about his writing skill as well. He used secretaries throughout his political as well as military career for official correspondence. Some surviving documents to date suggest that he could write, but his spelling in the French language was found to be ‘phonetic.’

CAREER AS A MILITARY AND POLITICAL LEADER

Toussaint Louverture gained freedom from slavery at a young age. But he remained loyal to his master and continued to work on his behalf willingly. He also got married and started to lead a comfortable married life with his wife and children.

In August 1791, a sudden slave revolt broke out in the Northern Province. The killing of white masters and destruction of plantation houses and fields by setting them on fire was rampant during the revolution. Toussaint first ensured the safety of his former master and his wife and then joined the slave revolution himself. He was a free man himself, and he dutifully secured the safety of his family members also. Eventually, he found that some of the revolt leaders were willing to compromise with the European radicals. He was against any compromise. So he raised his army and trained them in guerrilla warfare.

The French Government in a bid to attain the allegiance of the black population granted them the citizenship rights and freed them from slavery for the time being. Thus they successfully contained the threat to their colonial rule and also were able to secure the services of Toussaint Louverture on behalf of the French in their war against Spain in 1794.

By 1801, Toussaint started ruling Saint-Domingue as an independent state, though it was still under official French rule. He even prepared a constitution for governing the country after abolishing slavery and appointed himself as the Governor of the State. His acquisition of total control and power led to his recognition by the legendary French ruler, Napoleon Bonaparte. Though Napoleon recognized his efforts, he was skeptical about the fact that Saint-Domingue will not serve their interest as a profitable French colony until and unless Toussaint was reined in. In the later years, Napoleon sent his brother-in-law, Charles Leclerc with a huge army to capture Toussaint. Sensing Napoleon’s apprehension in this regard, Toussaint was preparing himself in advance for the onslaught.

After a bitter battle and bloodshed, finally, Toussaint agreed to surrender with the condition that slavery will not be reintroduced on the black people. But in the act of betrayal, Toussaint was arrested and imprisoned within a short while.

In 1782, Toussaint Louverture married Suzanne Simone Baptiste, daughter of his godfather Pierre Baptiste. He had three legitimate children from this marriage. They are Placide, Isaac, and Saint-Jean. Besides, he was believed to have fathered several children with different women during his youth.

The French captured Toussaint Louverture in July 1802. He was then sent to jail in Fort-de-Joux in the Doubs. He died on April 7, 1803, battling malnutrition, tuberculosis, and pneumonia.