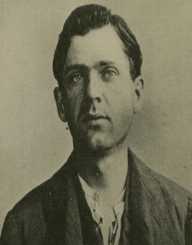 Leon Frank Czolgosz was born on May 5th, in 1873. He earned his fame after assassinating William McKinley, the 25th President of the United States. Seven weeks later, Czolgosz was executed.

Leon Frank Czolgosz was born on May 5th, in 1873. His birthplace as in Alpena, Michigan. He was born in a family of eight children to Paul Czolgosz and Mary Nowak. At the age of five, Czolgosz and his parents shifted and went to live in Detroit.

Five years later, his mother passed away while giving birth to Czolgosz sister. Later on, Czolgosz earned himself a job in a glass factory situated in Pennsylvania. When he clocked 17, he landed on another job with the Cleveland Rolling Mill Company.

The economy was badly hit in 1893, and as a result, a number of factories closed down including one where Czolgosz was working. Similarly, his brothers also lost their jobs.

Prior to assassinating the 25th president of the U.S., Czolgosz had developed strong perceptions that the American society was quite unjust. As a result, he had the notion that the rich only exploited the poor for their selfish gains.

In late 1901, Czolgosz traveled to New York where he resided in Buffalo. There, he rented a place to stay in Nowak’s Hotel located in 1078 Broadway. A month later, on September 6th, he armed himself with .32 caliber Iver Johnson and attended an exposition where the president was also expected. Czolgosz tried his best to reach the president and ultimately made it to the front of the line. President McKinley tried to greet him, but Czolgosz slapped his hands and followed it by two gunshots to his abdomen.

McKinley survived the gunshot wounds, but due to the injuries caused, he died after eight days.

Shortly after the death of McKinley, President Theodore Roosevelt took over as the next president of the U.S. On September 16th, Czolgosz was charged with first-degree murder. He was not sorry for his crime. He argued that he killed the president simply because he was an enemy of the people. Czolgosz was executed by electrocution. His brother witnessed his execution.